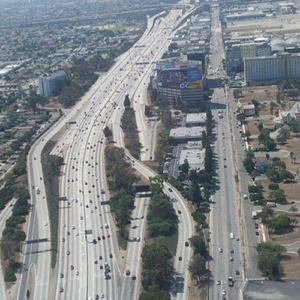 Logistics professionals operating amid the COVID-19 response have a complex patchwork of unprecedented conditions to navigate. But one somewhat beneficial, though certainly bittersweet, result may be faster delivery operations.

Congestion is a major source of uncertainty even in normal circumstances, so the extra speed and higher confidence in travel times can help supply chain players more efficiently and precisely plan their logistics operations. With much of Los Angeles’s infamous traffic stuck at home, the streets are clearer.​

California Gov. Gavin Newsom ordered all non-essential businesses in the state to cease operations Sunday. Warehouse workers, employees of logistics and distribution companies, maritime and railroad employees, private and public postal shipping workers, employees in the aviation industry (including air cargo operations) and all manner of repair workers for the relevant vehicles and equipment are considered by the state to be essential.

But less action at the port has not, so far, sent carriers away from the state. In fact, Terrazas said Convoy is seeing indications of the opposite.

“We’re actually seeing enough capacity on the West Coast to handle [demand] even with the increased volume that we’re seeing,” he said. Ken Adamo, chief of analytics at DAT attributed a spike in spot rates directly to the crisis response.

Early indications in Convoy’s data suggest carriers are heading toward the affected states. “Coming off over a year and a half when a lot of drivers are struggling, this is kind of a moment where they feel like they can finally get a little bit of business and so yeah, as they always do, they’re going to where the demand is,” said Terrazas.