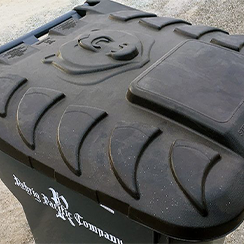 PRINCE GEORGE, BC, CANADA— The City will be introducing about 300 bear-resistant residential garbage carts to numerous areas in the Hart Highlands Croft neighbourhood on April 15. The pilot project aims to deter bears from trying to access garbage in residential bins.

The carts are very difficult for bears to open, but are easy for residents to unlock. Residents in the area will receive the carts at no cost on the regularly scheduled garbage collection day on April 15. Parks and Solid Waste Services Staff will monitor the success of the pilot project for potential expansion in future years within the Croft neighbourhood and other areas frequently visited by bears.

“Bears spend half of their year eating as much as possible before hibernation, which can include eating garbage, fruit, or other available attractants,” says Strategic Parks Planner Laurie Kosec with the City of Prince George. “Prince George has the highest number of bear sightings in BC, and an average of 35 local bears are destroyed every year as they usually cannot be successfully rehabilitated after they get used to seeking out garbage.”

The new bins are certified bear-resistant by the Interagency Grizzly Bear Committee and are fully compatible with the automated lift arms used by all City waste collection trucks. The City has already been deploying bear-resistant bins at civic facilities throughout the city, particularly along trails and the river, which are more likely to be frequented by bears. A bear-resistant bin is about five times the price of a regular, large-sized City bin, which is part of the reason the bins are first being tested as a pilot project.

“Bears are waking up early this year due to warmer temperatures and there is not much food available due to the snow cover,” says Kosec. “Garbage is a prime attractant for bears and carts should be kept in a location that is as inaccessible as possible to bears.”

City bylaws require that residents place carts at the curb no earlier than 4 a.m. on collection day and remove them by 7 p.m. the same day or risk being subject to $100 fine.

The City of Prince George is working towards becoming a Bear Smart community to help keep residents and bears safe. Administration is providing an update to Council on the City’s progress towards achieving Provincial Bear Smart status during the Monday, April 8 meeting of Prince George City Council.