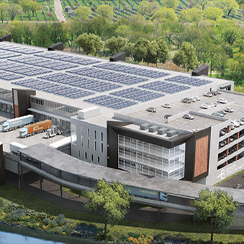 Big Picture: Designing the warehouse of the future

Demand for industrial space is at an all-time high in the United States, and it’s happening just as real estate gets constrained and existing facilities age. Here’s what developers and analysts see as the answer today and in the future.

It’s been nearly 20 years since this little industrial and logistics space was available in the United States, where CBRE, a commercial real estate services and investment firm, says availability dipped to 7% in late-2018. That marks 34 consecutive quarters of declining availability (the longest since CBRE started tracking the data in 1988) in a real estate sector where space absorption is currently outpacing construction by about 57 million square feet.

Add the growth in e-commerce, ongoing labor challenges, and demand for faster and faster delivery times to the mix and the end result is a market that’s ripe for change, innovation and new ways of thinking. Put simply, the days when large retailers built multiple, huge distribution centers to fill catalog orders and keep their stores stocked with product are long gone.

“Unlike the 70s and 80s, when JCPenney and Sears built 2-million-square-foot facilities and sold through catalogs, companies are moving toward smaller warehouses and DCs,” says Alberto Oca, a principal with A.T. Kearney’s operations practice. “We’re also seeing smaller facilities built closer to the customer, especially in major metro areas like Chicago, San Francisco and New York.”

Companies are also making better use of vertical space in those metro areas, where land is as scarce as it is costly. In 2017, Prologis broke ground on a three-story, 589,615-square-foot fulfillment center in Seattle. Once completed, the multi-story Georgetown Crossroads will have ramps for truck access to second-floor loading docks and a freight elevator that links the third floor to ground floor loading docks.

Oca says these vertical warehousing facilities present unique challenges for the companies that are using them, with dock location and the movement of materials handling equipment being two of the primary concerns. “Companies are trying to figure out how to build out and maneuver in these much smaller spaces,” says Oca, “but with the high cost of rent in some urban areas, the payoff can be worth it.”

At Russo Development in the Meadowlands, N.J., chief operating officer Mike Pembroke is just beginning to see the signs of more companies considering their vertical warehousing options, but says most are sticking to single-level alternatives. Matching those users with locations isn’t easy. “There are very few sites of significance available here for development,” says Pembroke. “Adding to the problem, just as our market was being fully built out, a lot of the existing buildings started to age.”

The situation isn’t getting any easier. “We’re stuck in a framework of having older, antiquated product that’s ‘just getting by,’ but there’s a dearth of modern facilities that would accommodate what most companies want,” says Pembroke. “Most of them just have to settle.”

To help offset these challenges, Russo Development is currently working on Kingsland, a 3-million-square-foot site that’s being transformed into an industrial/flex park.

To eke more space out of the locations that they do find, Pembroke says companies are asking for higher ceiling heights. In Kingsland, N.J., right now, the company is designing a building with 40-foot-high clearance and floor loads of 750 pounds per square foot. “That’s far in excess of any of the existing buildings in the marketplace right now,” says Pembroke, who points to the food and beverage industry as one that’s particularly interested in even higher ceiling heights.

“We’re working on a project right now with 65-foot clearance requirements and that will incorporate a very sophisticated materials handling system,” says Pembroke. That system is Frazier Industrial’s Pallet Mole storage system, a semi-automated system for high-density pallet storage. “One of the challenges with going up 65-foot-clear is that the floor has to be completely flat; you can’t even have differential settlement in the building,” Pembroke explains. “Because the Mole moves independently,” says Pembroke, “it doesn’t get thrown off by a floor that’s not perfect and flat.”

Pembroke says new warehouses and DCs are also being built with loading bays that are wider and deeper to allow for better lift truck maneuverability. Other key considerations include ample space for parking trucks outside; enough room for loading and unloading; and interior column spacing to accommodate a range of racking systems.

“It’s getting to the point where these are the basics that companies are asking for,” says Pembroke, “and a lot of marketplaces can offer it in abundance, but here in Northern New Jersey, I’d be surprised if even 3% of our industrial buildings are over 30-foot clear.”

One of IPG’s new projects is 2505 Bruckner, a multi-story logistics property on 20 acres in the Bronx, set for completion in 2020. “We’re focusing a lot on the innovation of the urban warehouse, which is essentially a new sector in real estate,” says Chung, “because urban warehouses haven’t been mass-developed in decades.”

With the rise of e-commerce and omni-channel retail, Chung says he’s seeing an “enormous need” for the urban warehouses that can augment the traditional supply chain. With online sales booming, he expects the trend to gather steam over the next few years. Also driving that trend is that, despite the fact that industrial real estate is getting more expensive, it’s still cheaper than retail space.

“You’re talking about $30 to $40 per square foot versus $400 per square foot for retail; that’s a huge difference,” says Chung. That opens the door for companies to build out urban warehouses that handle multiple functions, including traditional fulfillment, last-mile deliveries and even product showrooms.

“The urban warehouse serves as an expanded backroom,” Chung says, “by handling more frequent store replenishment, reducing the amount of inventory stores have to carry, and effectively reducing the expensive retail footprint.”

As he looks around at the industrial marketplace, outside of the facilities built for users like FedEx and UPS, Chung hasn’t seen much progress being made to bring warehouses and DCs up to today’s fulfillment standards. Because of this, he says adaptive reuse of existing facilities is difficult at best. “The loading dock ratio doesn’t work, the parking doesn’t work, the ceiling heights aren’t right, and so forth,” Chung says.

Knowing this, Chung says Innovo focuses on building functionally relevant warehouses that service the “new needs” being driven by the rise of e-commerce and shrinking delivery times. That means building urban facilities that have enough loading docks and ample ceiling heights, both of which help maximize facility throughput. Location also matters, he says, as does the opportunity to build vertically.

“You can’t just build a single-story building on a piece of land here; it’s too expensive,” Chung says. “So instead you build double-story to utilize the land without having to charge double the rent.”

Thinking ahead, Chung says the company is including electric car/van charging stations and solar panels in its site plans—for a time when autonomous vehicles will play a bigger role in the fulfillment process (and in our daily lives). “Because these warehouses have a lot of surface area,” he says, “that will help mitigate the electric costs.”

With about 3 million square feet of logistics development construction slated to commence in the next 18 months in Southern California and Nevada—and 12 million total square feet of real estate in California, Arizona, and Nevada in its portfolio—CapRock Partners is seeing a 1% to 2% vacancy rate on its industrial properties currently.” To date, CapRock Partners has acquired, developed or has in its pipeline approximately 12 million square feet of industrial real estate totaling more than $1.6 billion.

To deal with the dearth of space, some companies are borrowing a page from sharing-economy companies like Uber and Airbnb and leasing available real estate from larger companies that may not need all the space that they have (or, at least not year-round). Others are doing the exact opposite and asking their own suppliers to do more drop shipping to avoid having to carry and ship as much inventory (and, effectively reducing their own distribution footprints).

“A large retailer will handle the transaction, but won’t actually take control of the product,” says Pharris. “That’s the move of the future.”

As warehousing requirements grow more complex and as product lifecycles continue to shrink, Oca says the direct-to-store and direct-to-consumer models are going to become a focal point for more companies. Providing those services while also keeping costs in check will be an ongoing challenge for businesses, says Oca, who expects to see more collaborations like the Kroger-Walgreens alliance (in December the companies announced that 2,300 products, branded Kroger Express, would be sold at 13 Walgreens stores).

“Shared-use asset distribution is not only happening right now, but it’s also the future,” say Oca. “Everyone is thinking about it right now.” They’re also thinking about trends like micro-fulfillment or turning sufficient space into company storage to enable faster last-mile delivery. “Companies want to be as close to major urban or consumption areas, but they also want smaller facilities that cost less and are easier to maintain,” says Oca.

The same retailers and distributors want to make sure they’re not “touching” their product cases too many times and that they’re making the best use of their labor pools. “To accommodate this,” Oca explains, “we’ll see more companies setting ‘asset allocation’ type facilities for high-velocity items that can pretty much just be crossdocked.”

Reiterating his point about the lack of mass-development in urban warehousing, Chung sees the ever-evolving supply chain as a key driver for more growth in that area going forward. “The really smart players in the supply chain are going to figure it out because, at least for now, demand for industrial space is going to continue exceeding supply,” Chun predicts. “That’s going to force everyone to work harder to figure out the best logistics approach—both from the shipping and the receiving perspective.”