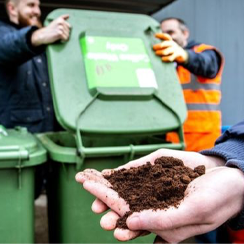 Scott Kennedy and Fergus Moore said they came up with a unique way to extract oil from used coffee grounds which had a wide range of uses.

Palm oil is found in many household products, but environmentalists say demand for it is devastating rainforests in Asia.

Manufacturers are now under pressure to find an alternative.

Mr Kennedy and Mr Moore came up with their idea while working in coffee shops during their time studying business at Glasgow’s Strathclyde university, and saw first-hand the amount of food waste in the hospitality industry.

“In Scotland, that amounts to about 40,000 tonnes a year – across the UK, more than half a million tonnes.

“And coffee grounds are so heavy that it takes their waste bill through the roof.”

Explaining the idea behind his Revive Eco company, Mr Moore said: “There are oils in coffee with a wide range of uses in different industries – cosmetics pharmaceuticals, food and drink, household products – you name it, there’s probably a use there.

“We’re developing a process to extract and purify these oils.”

Mr Moore added: “The most exciting part for us is that they have all the same components as palm.

“Palm oil’s in the news for all the wrong reasons. It’s really exciting for us that we could potentially provide a local and more sustainable alternative to all the industries that are currently using palm oil.”

Mr Moore said it had been difficult setting up the company because he and his business partner were not from an engineering background, but added: “We’ve surrounded ourselves with incredible advisors and mentors that have made the process easier.”

Revive Eco has already secured £235,000 of funding from the Zero Waste Scotland agency.

And now they are in the running for a share of a £776,000 funding pot, after it was announced Revive Eco would be representing Scotland and Northern Ireland in the Chivas Venture competition.

Twenty global companies are competing for the prize, being announced in Amsterdam in May, after an online public vote.

Mr Moore said of the company’s ambition: “We want to have the process up and running in Glasgow by next summer.

Longer term, we want to build the business to a place where we can franchise into different countries and replicate the business model elsewhere.

“We’d rather build a new process in Rome, Paris, Berlin – any other big coffee-drinking cities round the world.”