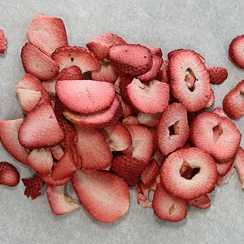 Dehydration makes these snacks a food-waste solution of the future

With its exclusive drying technology, Treasure8 sucks the moisture from fruits, vegetables, and food scraps that would otherwise go to waste and transforms them into next-generation snacks.

Ground Rules chips have the crisp, crunchy texture you might expect from biting into a potato chip from a greasy bag, but the similarities pretty much end there. These chips, which come in three flavors–apple, beet, and sweet potato–are made with only one ingredient: the fruit or vegetable themselves. The crispy texture is the result of a dehydrating process that can remove 97% of the moisture from sliced fruits and vegetables and turn them into shelf-stable snacks without oils or preservatives.

The brightly colored Ground Rules chips are something of a test run for a San Francisco-based startup called Treasure8, which wants to tackle food waste using its new dehydration technology. Over the past several years, Treasure8, in partnership with the USDA and U.C. Davis, built a drying machine called the Sauna, which can fully dehydrate food like fruit, vegetables, and fungi–without stripping them of nutrients–in around an hour. In addition to the Ground Rules chips, Treasure8 also makes a line of cookies, called One Smart Cookie, that are composed of 25% dehydrated vegetables (those will be available later this year). But what’s as notable is the source of the vegetables Treasure8 dries: The company sources food waste from production facilities, meaning that all its products don’t require any new agriculture and can help cut down on our massive food waste problem.

The idea for snack foods made from dehydrated vegetables originated through Treasure8’s original work with Google in 2014, says CEO Timothy Childs, who previously founded the chocolate company TCHO. Google wanted Treasure8 to develop a snack that would essentially deliver all the same nutrients as a meal, instead of the empty calories we often get when we graze. In the process of figuring out how to integrate the benefits of vegetables into snack food, Childs and his team learned about dehydration and decided to flip their business model to focus specifically on making healthy snack foods that deliver the nutritional benefits of produce but in a more shelf-stable and accessible format.

Treasure8, Childs says, now holds the exclusive patent to make and operate these dehydrating machines that preserve nutritional density of food. Going forward, Childs says, he wants to deploy Sauna machines to food processing and distribution centers around the world to ensure that food that might be wasted could instead be dried and its nutritional content translated into compact foods, like nutrition bars. Eventually, Treasure8 wants to work with other food producers to create ways for them to integrate this dehydrated nutrition source into products they make. “It has to work with the current food distribution system,” he says.