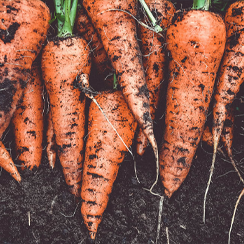 A new wave of companies is figuring out how to make new products from food that used to end up in the trash, from pulp popsicles to beer bread. Here are 20 to watch.

The label on a bottle of the cold-pressed juice Wtrmln Wtr doesn’t mention food waste. But the problem was the inspiration for the company, which launched six years ago. When the founders learned that hundreds of millions of pounds of watermelon stayed in fields to rot because the fruit was judged too unattractive for sale in supermarkets, they decided to create a product that could help avoid that waste. The juice is now available nationally, and the company is growing 30% year-over-year.

It’s one example of an increasingly crowded space. ReFed, an organization that tracks the food waste industry, counts at least 70 businesses and nonprofits that now transform food that otherwise would have been wasted into new products. “We’ve seen steady growth in the number of organizations developing upcycled products and the types of ingredients being used,” says Chris Cochran, the organization’s executive director. The majority of these companies launched within the last five years.

In the U.S.—where Americans now waste 70% more food than they did in the 1970s—food waste is responsible for roughly the same amount of greenhouse gas emissions as 37 million cars. Globally, if food waste was a country, it would be the third-largest polluting country in the world. When food rots in landfills, it releases the potent greenhouse gas methane. But the largest source of emissions comes from growing the food; even if it’s composted, food waste also wastes the fertilizer, fuel, and other resources that went into producing it. Agriculture uses nearly half of U.S. farmland and two-thirds of its freshwater. Waste happens at every stage of the process, from farm fields—where food may be abandoned if a farmer has a surplus or the food has imperfections—to distribution centers, supermarkets, restaurants, food processing plants, and homes. Consumers throw out the majority of the food wasted in the U.S., or roughly $450 of food each year. At the same time, more than 40 million Americans struggle with hunger. The problem is smaller in most other countries (Australians waste more, per capita) but still significant.

The startups making new food from wasted ingredients typically focus on waste from farms and food processing plants. Some of the startups are still early-stage and only sold online or in a few stores, but others, including Wtrmln Wtr, have gone mainstream. Large food companies, like Tyson Foods, have also launched new products with ingredients that would have been discarded in the past—in Tyson’s case, it made a protein crisp called Yappah from chicken trim, vegetable puree, and spent grain from Molson Coors. The demand for former waste is affecting supply chains. Wtrmln Wtr cofounder and CEO Jody Levy says that one watermelon grower used to have four semi-truckloads of watermelons each season that he would write off as waste; now he sells it to be made into juice. “It has allowed the growers to think differently about how they treat the melons that previously weren’t able to be sold,” she says.

In some cases, companies have found that it makes the most sense to create an ingredient to sell to other manufacturers rather than a new consumer product. Renewal Mill, a company that raised a $2.5 million seed round in early 2019, creates a nutritious flour out of a by-product of making tofu and soymilk. The company currently makes a chocolate chip cookie that serves as a proof of concept, but plans to focus primary on selling to other businesses. “We see a larger opportunity to move larger volumes of the byproducts and make a larger dent in the food waste problem by selling to large CPG companies,” says Caroline Cotto, the chief operating officer for the startup.

Some of the food waste ingredients, like the tofu byproduct, come from manufacturing, but the biggest opportunity for growth comes from farms, where growers are incentivized to overproduce to ensure that they can meet orders. “You’re talking about really high-quality, fresh ingredients that currently lack a market,” says Cochran. While repurposing food waste in new food is only one type of solution—others range from innovations in labeling expiration dates to an invisible, plant-based coating that can help produce last longer—it can be cost-effective, as the ingredients are sometimes available at a reduced price.

A 2017 study suggested that consumers might also pay more for foods with “upcycled” ingredients. When the products market their ability to prevent food waste, that can also make consumers more aware of the problem and potentially help inspire them to cut waste at home, where the biggest proportion of food ends up in the trash. Americans waste nearly a pound of food per person per day. And though it can’t tackle the entire problem, upcycling food waste can make a difference; ReFed estimates that using donated products alone can divert more than 100,000 tons of food waste each year, and generate $285 million in economic value.

The number of brands on the market is likely to continue to grow, says Nik Ingersoll, cofounder and CMO of Barnana, a snack company founded in 2012 that sells “upcycled” dehydrated banana snacks made from bruised, overripe, or otherwise imperfect bananas that are usually left to rot on banana plantations. Now a multimillion-dollar business, it sells products in both natural and mainstream supermarkets, and has rescued roughly 20 million tons of bananas to date. Ingersoll believes that consumers are still beginning to recognize the full extent of the food waste problem. “They think of food waste like, ‘Oh, I didn’t eat everything on my plate or in my fridge, and I threw it away,’” he says. “But through the growing distribution, retail and consumer level, there’s all sorts of waste.” As that’s better understood, he thinks that demand will grow. “As that awareness spreads, there’s going to be consumer pressure to buy those types of products. I think people are just more conscious in the way they consume things. And on the brand side, I think that it makes for a compelling story to tell when you’re preparing your ingredients in that way. So I would anticipate it continuing to grow a lot. I think we’re still very early on.”

Here are 16 more companies that are using food waste as ingredients.

When grain is made into beer, the brewing process takes out sugar—leaving behind protein, fiber, and micronutrients that Regrained makes into a flour it calls “SuperGrain+” and incorporates into snack bars. The company also sells the flour to other manufacturers and is working on another line of products that it plans to release later this year.

Bay Area-based Render partners with chefs to create new products like Weyla, a beverage that blends whey from a Sonoma creamery with fruit, herbs, and botanicals, and Bryner, a savory drink mix made with upcycled pickle brine that can be used in making a Bloody Mary. In a collaboration with chefs from San Francisco’s State Bird Provisions, it recreated a snack that the chefs make for themselves in the restaurant kitchen to make use of leftover quinoa.

When a former Starbucks engineer learned about the challenge of coffee cherry waste—tiny fruits that hold coffee beans and usually end up rotting on coffee plantations—he created a new process that converts the fruits into flour and launched a startup (formerly known as CoffeeFlour) to produce it. The ingredient, which can be added to drinks, baked goods, and other products, also helps coffee farmers increase incomes.

This Denver-based pickle company didn’t want to throw out the cucumber-infused water that it creates as part of the pickling process, so it started making it into a Bloody Mary mix. Now, it says, it’s better known for the mix than pickles, and the product helped it achieve a goal of zero waste.

When sunflower seeds are processed for their oil, the end result is a hard, dry, wood-like “oilcake” that’s usually used as animal feed. But the ingredient has more protein than meat, and the founders of this startup realized that it had potential as a food for humans. They found a way to process the oilcake with steam, heat, and pressure to puff it up and turn the ingredient into chips.

Salt & Straw, a chain of West Coast ice-cream shops, made a “Second-Steeped Rum Spices and Apple Butter” flavor in 2017 from spices rescued from a Portland distillery and apple butter made from bruised apples that otherwise would have been wasted. It’s one example of several restaurants that have incorporated food waste into a temporary menu item.

The vegan mayo made by Sir Kensington’s replaces eggs with aquafaba, the liquid made from cooking chickpeas—something that it sources from a hummus manufacturer that otherwise would have been thrown out. The brand was acquired by Unilever in 2017.

Baldor, a major food processor that makes products like “baby” carrots (that is, regular carrots carved into tiny pieces), turns fruit and vegetable scraps into multiple products: Some fruit scraps go to juice companies, vegetable scraps go to chefs for use in stocks, a mix of vegetables are dried and crushed into a flour that can be used in place of wheat, and other scraps are used in meal kits that include veggie noodles.

Based in the Netherlands, a startup called Kromkrommer—a play on the Dutch words for crooked and cucumber—turns imperfect vegetables into soup. Each is packaged in containers with cute drawings of the misshapen ingredients inside. The company also recently started selling toy vegetable kits called Wonky Fruits and Vegetables as a way to start educating kids early about the value of ugly produce.

If the spent grain from brewing can be used to make bread—something that the Chicago-area Hewn Bakery does in one of its loaves—bread can also be used to make beer. Toast Ale, which launched first in London, makes a pale ale with surplus bread as an ingredient. The company estimates that around 44% of bread is wasted; it can save roughly one slice of bread per bottle. Other breweries, like the Pittsburgh-based craft brewery East End Brewing, have also made beer with bread.

This European company rescues fruit and vegetables that are on the verge of being wasted, freeze-dries them, and turns them into a powder that contains most of the nutrition of the original fruit, but can last as long as two years. The company initially planned to supply the powder to nonprofits to address hunger, but appears to currently be selling to consumers.

Using spent grain from breweries in Brooklyn and Queens, this startup creates a barley “super flour” that has twice as much protein, 12 times as much fiber, and one-third of the carbs of regular flour. It sells the flour directly to consumers, along with a brownie mix and brownies. Its underlying technology can also be applied to other by-products, from fruit skins to coffee waste.

Making yogurt results in large quantities of whey, a liquid that is often discarded. Brooklyn-based yogurt company White Moustache decided to start marketing it as a “probiotic tonic.” The company also uses surplus fruit along with whey in frozen yogurt probiotic pops.

Based on Treasure Island, a small artificial island in the San Francisco Bay, this startup designed technology that dehydrates fruits and vegetables to turn them into nutritious, shelf-stable chips that don’t require preservatives. The company sources produce that would otherwise be wasted from food processing plants.

RUBIES IN THE RUBBLE

This U.K.-based company makes condiments from surplus food, like a spicy tomato relish that uses tomatoes that are too ripe or flawed to be sold in the produce section, or a pear chutney made with imperfect pears.