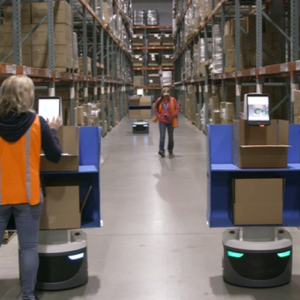 How cobots are changing the nature of fulfillment

Collaborative robots promise greater efficiency and safety, although their functions still have limits — at least for now.

If you type the word “cobot” into a Word document, it will think you made a mistake, and try to correct the word to “robot.”

And while most cobots are robots, the two aren’t necessarily the same thing. A cobot is a collaborative robot, one that works with a human to help that human complete tasks. Whether it’s Amazon’s Kiva robots, which look like large Roombas, or pallet jacks that follow a worker around the warehouse, cobots are meant to make a worker’s life easier.

Cobots are also becoming more prevalent in e-commerce distribution and fulfillment, as organizations look to make their warehouses more efficient and shore up labor gaps, especially going into the busy holiday season. As of 2018, the global cobot market size was valued at $649.1 million, according to Grand View Research and is expected to expand at the compound annual growth rate of 44.5% from 2019 to 2025.

Cobots drive efficiency in the warehouse

Right now, the most common use of cobots in distribution and fulfillment is to improve efficiency by picking. Instead of workers walking long paths around a warehouse to make their picks, the robots “cover the travel distance,” Karen Leavitt, chief marketing officer of Locus Robotics, told Supply Chain Dive in an interview. “In the past, humans would use glorified shopping carts to serpentine their way through the warehouse,” spending 80% of their shift walking the warehouse and only 20% on doing activities that generate revenue. Now, she said, “robots do the bulk of the travel and the worker operates in a smaller footprint.”

Cobots can also make warehouses more efficient by doing repetitive, menial tasks that workers hate to do. In a case study of Darex, a manufacturer of drill and knife sharpeners, Universal Robots found cobots increased efficiency by 30% by doing things like screw driving, helping with the knife sharpening assembly process, and folding and packing boxes.

Cobots can also be used in the gamification of the warehouse. “As the worker is interacting with the robot, the robot is coaching the worker,” Leavitt said. It can tell workers if they’re hitting their targets, and tell them they’re doing a good job or if their picking team is in first place.

Robert O’Dwyer, logistics industry principal at Kronos Incorporated, told Supply Chain Dive in an interview that he also considers some types of software to be cobots because, like a physical robot, it takes repetitive tasks off the shoulders of employees. For example, software can use artificial intelligence (AI) and machine learning to automatically approve time off requests “based on volume parameters you set on how many people are allowed to be off,” he said. The platform can also review shift swaps, so managers don’t have to figure it out and thus can invest that time into something more valuable instead, like employee engagement, O’Dwyer said.

Worker safety and labor gaps: Are cobots the answer?

While Amazon’s Kiva continues to generate buzz, cobots don’t need to be that complicated to work in a warehouse. They can be as simple as autonomous pallet jacks that follow a worker around the warehouse (versus a worker pulling it), or wearable robotics that help employees with overhead work.

These are the kinds of things that will improve worker safety, said O’Dwyer. Ankle twists and sprains from jumping on and off a pallet, lower back injuries from lifting heavy items and upper body fatigue from doing repetitive overhead work can all be nearly eliminated with the use of cobots.

This can help companies cope with warehouse labor shortages, as jobs are safer and thus more attractive to workers, and also keeps workers on the job. Cobots can also be scaled up during peak season, said Leavitt. They can also do putaway during less busy times instead of it being done during a graveyard shift. That allows e-commerce businesses especially to keep shipping on time during peak operations without pushing out their deadlines or setting earlier cut off times for shipments to arrive by Christmas.

Cobots’ limits, and what they could do in the future

Cobots still can’t do everything, David Clear, vice president of business development at Vecna Robotics, told Supply Chain Dive in an interview. “The more congested, the more unstable or more inconsistent an environment, the harder it is to get a genuine, repeatable, consistent benefit” from cobots, he said. Warehouses that were not built with cobots in mind can also be hard (and expensive) to retrofit to accomodate them.

Cobots may not be able to pick up large, bulky or oddly shaped items, nor pack them as well as a human worker can, said O’Dwyer. They also can’t give specialized finishing touches to shipments, like wrapping items in tissue paper and tying them up with a bow, as some high-end retailers require for online orders.

Leavitt thinks cobots will be able to do more things and become more affordable as the cost of materials drops and the technology leaps ahead, largely driven by work being done in the automotive industry for self-driving cars. “When we first started designing our robots six years ago, it was pretty expensive to put one of these bots together,” she said. “If we had the responsibility to try to drive volume in those parts, they would still be very expensive. But because we have every major automotive company involved, there’s functionality available to us that didn’t exist a year or 18 months ago.”

Leavitt also sees cobots becoming more usable in outdoor environments that aren’t as controlled as a warehouse and playing a bigger role in distribution and fulfillment of medical devices and pharmaceuticals. “Once you start to get the robot into different environments, it opens up new use cases,” she said.