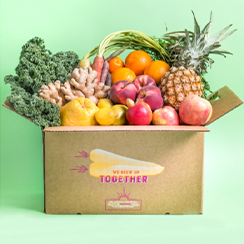 NEW YORK — You may have heard the term “ugly fruit.”

Regardless, people are concocting creative ways to use wonky-shaped, wrong-sized or slightly scarred produce that’s otherwise wasted or sold at a loss.

Ben Simon, CEO and co-founder of San Francisco-based Imperfect Produce, flew into Manhattan recently to drum up awareness of the waste-not-want-not company’s expansion into the mid-Atlantic and Northeast markets. Plus, the company is fleshing out its product offerings.

The subscription-based company buys directly from farms the fresh produce that doesn’t make top grade but is still delicious. Then Imperfect Produce creates customizable boxes, to be delivered weekly or biweekly to consumers at home at a price that’s 30% less than retail, according to the company. The shorter supply chain shaves off three to four days of transit time than that of a typical retailer, Simon said.

Imperfect Produce helps growers and packers get more money — roughly half the F.O.B. price of Grade 1 produce — from their tasty, yet cosmetically displeasing, produce that they normally let rot in the field or sell at a steep loss for packaged goods, animal feed or compost, Simon said.

“Losing money is the main thing, yes, but for growers who put their heart and soul into it, they feel that way just as much for the imperfect fresh produce,” Simon said.

Already serving Newark, N.J., Philadelphia, Baltimore and Washington, D.C. on the East Coast, Imperfect Produce will move into greater New York City in the next two months, and then Boston, Providence, R.I., Hartford, Conn., Pittsburgh, and Richmond, Va., by the end of 2019.

Simon expects to double the company’s markets by the end of the year, up to about 40.

“It’s exciting. We’re growing fast and it’s full-speed ahead, launching two to three new markets a month,” Simon said. “We’re just growing our customer base, trying to recover as much produce as we can.”

The funding has fueled the company’s rapid market expansion into 22 of America’s largest cities so far, providing 1,000 living-wage jobs, he said.

As Imperfect Produce grows as a business, its impact has also increased.

Simon’s grandfather was a farmer in New Mexico, and he has childhood memories of driving in his pickup truck to pluck watermelon from the fields.

But the idea for this kind of food-recovery business began in 2011, when Simon and his college friends, Mia Zavalij, and Cam Pascual, noticed all the food being wasted at the end of the day in the dining hall at University of Maryland, College Park. They created a student movement that’s grown into the Food Recovery Network.

Simon’s friend, Ben Chesler, a Brown University student, joined in, getting his school to donate several hundred pounds of food too.

Soon, 230 colleges nationwide adopted the program, he said. Since then, Food Recovery Network has recovered 3.9 million pounds of perishable food and donated it to those in need, which translates into 3.2 million meals.

Within six months of launching, the company was included a National Geographic magazine cover story, helping to skyrocket its scale and scope.

Critics of this public-benefit-corporation business model have said the food is being diverted from food banks and encroaching on the sales of small community farmers.

Food insecurity in the U.S. has hovered in the 11-13% range the last several years, meaning about one in eight people, or 40 million, live in households with limited access to adequate food during the year due to lack of money and other resources, according to the U.S. Department of Agriculture’s Economic Research Service and Feeding America, a nonprofit group.

But Simon said the company is not buying and selling food that would have otherwise gone to food banks.
“We’re committed to making sure that our mission to reduce food waste never gets in the way of our food bank partners’ ability to recover food for people in need,” Simon said.

According to food-waste research group ReFED, even after the food goes to processors, food banks and fresh markets, there’s still 20 billion pounds wasted every year.

“The fact is, most of this produce doesn’t have a good market to go to,” Simon said. “Given how much is being wasted, there is plenty of produce to be recovered by both food banks and Imperfect, and we’re glad to also be a much-deserved revenue stream for growers who work hard to grow this food,” Simon said.

Imperfect also serves as a pipeline to get more produce from farms to food banks and has donated more than 2.2 million pounds of produce to more than 91 nonprofit partners and food banks.

Addressing this issue in another way since its launch, Imperfect Produce has offered Reduced Cost Boxes at a 33% lower price for people who meet the income qualifications of the U.S. government’s Supplemental Nutrition Assistance Program. More than 10,000 low-income customers nationwide are signed up for the reduced-cost box program, according to the website, with Imperfect contributing close to $2 million in 2019 to subsidize these additional discounts.

“We passionately believe that nobody should be priced out of good food,” Simon said.

The company is working with about 50 farmers in along the East Coast, from North Carolina to New Jersey, for a total of 250 growers nationwide, Simon said.

Since December 2017, Imperfect Produce has increased its staff by 200%, paying 60-70% above minimum wage for hourly roles and providing each employee with stock options as an equal opportunity employer with a dedicated internal program for upward mobility, he said.

Imperfect Produce offers about 60 kinds of produce, half of which is organic.

So Imperfect Produce is honing its competitive edge by offering box customization, as well as increasingly more choices.

The inventory is diversifying into shelf-stable groceries, undervalued, overlooked foods such as not-quite-tricolor quinoa from a sustainable Peruvian grower.

Soon, Simon sees the company getting into other perishables, such as dairy, eggs and meat. Before long, Imperfect Produce may whip up prepared meals made with recovered food, he said.