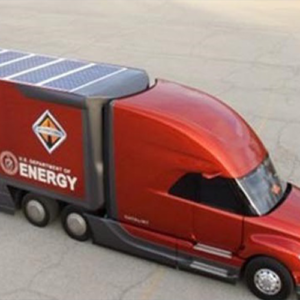 In trucking, is it sunrise for solar?

Solar panels on trucks can supplement battery and power lift gates, though the technology today isn’t enough to power a truck down the road.

Galileo said, “The sun, with all those planets revolving around it and dependent on it, can still ripen a bunch of grapes as if it had nothing else in the universe to do.”

So what’s one more task for Ol’ Sol? In addition to ripening those grapes, the sun also can help keep them fresh as they’re transported from farm to market to home. According to a report from the North American Council for Freight Efficiency (NACFE), “interest in solar panels is growing among fleet managers because truck batteries are often no longer able to meet the power needs of today’s trucks due to increased driver comfort demands, idle reduction regulations and increased tracking requirements.”

The 3 use cases for solar on trucks

Solar panels for trucks differ from those we’re used to seeing on fixed buildings, which are rigid and thick. Panels for trucks are flexible, thin, lightweight and can be affixed to the curves of a tractor. The NACFE report focuses on the three primary uses of solar on tractors:

A number of trends are driving the advancement of solar technology for trucks, including the driver shortage, hours of service regulations, the solar investment tax credit and even the emergence of commercial battery electric vehicles, the report said. “Solar technology is also constantly evolving, and the future might lead to improved technologies, cost reductions, more electrification of trucking loads, and extended trade cycles.”

Solar panels can extend the run time of battery HVAC systems, not only to help the HVAC system make it through the night without draining the truck’s batteries, but also to reduce the load on the alternator the next morning, the report said.

Trucks often have to idle while waiting for a dock at the distribution center or while making deliveries. Many municipalities have regulations to prevent idling and Walmart, for one, doesn’t allow idling for trucks that stay overnight.

“Idling puts about 7 miles on an engine for every hour it idles,” he said. “Engines have a diesel particulate filter (DPF) and when the truck is idling, the temperature is not as hot as it needs to be to burn off the particulate. It costs $1,500-$2,000 to replace the filter and $1,000 to clean it.”

Multiple stops on a delivery route can put extra stress on lift gates, especially when they are handling heavy loads or running a high number of daily cycles. Shaffer noted a food-service company on Long Island that sends about a dozen trucks a day into Manhattan. In addition to the stress on the lift gates, the company amasses numerous traffic tickets for idling while powering the lift.

Generally, the engine’s alternator is too small or doesn’t have enough run time to keep up with battery demand, according to the eNow website. One driver, Shaffer said, told him “I’m going through alternators like candy.”

Basically, solar panels replenish batteries to full charge around sunrise and then go into a “trickle” charge to continually charge the batteries during daylight hours. Energy used during the lift gate operation is continuously replaced.

The business case for solar

Solar panels, at least as the technology exists today, don’t produce enough energy to power a truck down the road, pointed out Michael Notarangeli, EVP of logistics at global supply chain consultancy Maine Pointe. They can, however, provide power to systems like lights, air conditioning, lifts and internal auxiliary power.

“Solar panel use can extend a truck’s battery life, meaning fewer jump starts or a reduced need for roadside assistance,” he said. “Additionally, for day-to-day living and cab comfort, solar panels provide the necessary power to run such cab-based items as small refrigerators, TVs, microwaves and small electronic devices.” Drivers also can run their HVAC system throughout the night without draining the truck or idling the tractor, which can be a key benefit toward driver recruitment.

Sustainability has taken a key place in logistics decisions, and also could figure strongly in a fleet manager’s consideration of solar, Notarangeli said via email.

The main incentive for a fleet manager to make the decision to go with solar panels would be to comply or to take a bold, first step as part of a broader, multi-faceted, sustainability program, he said. “Sustainability programs often require a minimum of annual progress reporting, and may be a table stakes issue for the award of new business, so it’s a strategic decision with longer term implications rather than a cost-savings initiative.”

In addition, some buyers require their suppliers to report green initiatives, so operators may decide to install solar panels as part of an internal values-driven program. That, Notarangeli noted, would be an investment in the program, and would defray operating costs over time, but also would be a net add in the short run.

Fuel efficiency is important to the trucking industry for cost and sustainability reasons. After all, the average Class 8 truck (the heaviest at more than 33,000 pounds) gets just 6.4 miles per gallon and travels about 100,000 miles per year, according to trucks.com. The addition of a solar panel system to a trailer may both extend battery life and reduce emergency roadside calls due to dead batteries. If there is a positive return on investment for the addition of a solar panel system, this is where to expect the savings, according to the NACFE report. Fuel savings are generally a very small part of the overall benefit that comes from a solar panel installation.

“Most fleets we talked to implemented solar panels primarily based on an assumption of improving driver retention and thus avoiding hiring and training expenditures,” the report said. “We think it is reasonable given the very high cost of hiring and training drivers that a benefit of $100 per truck per year is a valid assumption if solar panels are installed on the vehicle.”

However, the fleet manager still must convince the C-suite, especially the CFO, that solar is worth the investment.

“Logistics managers are all about the bottom line — getting product from point A to point B,” Hirsch said. “Therefore, the decision to adopt solar paneling is entirely dependent on efficiency. Ideally, if the sun is high and the weather is good, solar power can cut back on certain kinds of delays, jump starts and idle time, ultimately easing a logistics manager’s job.”

Don’t expect to see heavy-duty trucks powered entirely by the sun rumbling down the highways any time soon. There have been some limited tests for lighter vehicles that have been somewhat successful, according to Notarangeli, but not for the hours of service necessary to fuel a solid business case.

“It’s really a physics problem — weight, mass and friction,” he said. “The solar panels would not be able to keep up with the consumption of energy required to move the weight of a truck down the road.”