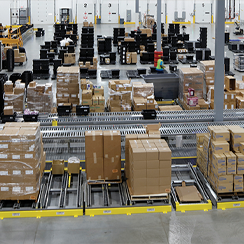 In recent years, a handful of high-profile hospital systems, including the Cleveland Clinic and Utah’s Intermountain Healthcare, upended the traditional healthcare distribution model, which relied on large, third-party distributors to purchase, inventory and deliver medical supplies to hospitals, clinics and doctor’s offices, often on a just-in-time basis—at a cost.

Instead, they have created their own supply chains to manage those processes. Add Indiana University Health to that list. The largest healthcare provider in the state is in the midst of “transforming hospital supply chain distribution through consolidation and automation” by bringing all of those activities in-house along with a professional supply chain management staff.

“Three of the positions on my team did not exist when I got here in 2015,” says Dennis Mullins, senior vice president of supply chain operations, who was charged with making the transformation complete.

The centerpiece of that transformation is a 300,000-square-foot Integrated Service Center in Plainfield, Ind. In addition to housing the healthcare system’s order fulfillment and distribution activities, with office space for the corporate supply chain team, it brings together records keeping, inventory management, logistics, fleet services, equipment planning and non-acute services in one building. They are planning to provide future services to pharmacy, laboratory, print services, homecare, physician offices and IT services.

The distribution operations was designed by a system integrator (Swisslog), and the highly automated facility features:

All told, the facility manages 3,400 stock keeping units and fills 600 requisitions a day, handling 265,000 units. The total investment was more than $9 million.

Having gone live in July 2018, the Integrated Service Center is currently serving 16 hospital locations around the state. But the transformation is not complete. Over time, Mullins and his team expect to extend services to the rest of the network. “We have 500 non-acute doctor’s offices and surgical centers in our network with more than 1,000 potential delivery locations,” he says. “We will be developing a solution to ship small packages using 3PL providers to those locations.”

The new approach is already contributing to the bottom line: “We set a target of $4.2 million in savings for the first year, and we exceeded that number,” Mullins says. He expects a total payback in less than 2.5 years.

“It all started with a rainstorm.” That’s how Mullins remembers the chain of events that led to the new Plainfield distribution center. However, the pressures on the healthcare industry played a significant role.

If you pay some or all of your medical expenses, you know the cost of healthcare has been on the rise, often at a rate that exceeds other areas of the economy. That hasn’t translated into price growth for hospitals, which are under pressure to simultaneously do three things: increase revenue, decrease costs, and do one or both while maintaining or improving patient care. That, after all, is job one.

The need to increase revenue has resulted in a spate of mergers and acquisitions across the industry, as hospitals that previously operated independent of one another merge or are acquired by larger players, such as university health systems. Between 2004 and 2014, the number of hospitals that were part of a health system rose from 2,668 to 3,183. Similarly, private practitioners—the Marcus Welby’s of the world—are closing their practices and going to work for these health systems.

Meanwhile, the need to cut costs has led major hospital systems to change the traditional third-party distribution model by developing their own procurement departments to contract directly with manufacturers and creating their own distribution and logistics networks. That, of course, requires the development of a new set of core competencies.

That is the place Indiana University Health, the state’s largest healthcare provider with 16 hospitals and some 500 practitioner offices and surgical centers, found itself in 2015 when Mullins was brought on board. “We had a traditional distribution model,” says Mullins, who adds that the hospital system had a 10-year relationship with a major medical supplier.

In the old model, the distributors delivered bulk shipments to central distribution areas and two regional warehouses along with just-in-time deliveries of products ordered in low units of measure—instead of a case of 24 bags of IV fluid that might sit on a shelf, a hospital could order just six bags delivered the next day to a specific supply room. While convenient, those types of services came at an additional cost.

He and Jennifer Alvey, the executive director of supply chain strategic sourcing, say that issues related to supplier drug shortages—a hot topic in the industry—or additional fees for just-in-time delivery of low unit of measure items were a concern, but they weren’t unhappy with their distributors’ performance. “It is just that the model of using a third-party distributor is antiquated for a system of our size,” Mullins says. By contracting directly with manufacturers, he estimated the potential savings from “2% to 10%.”

One day, Mullins and his operations team were touring a central storage building and discovered it had sprung a bad leak during a rainstorm that damaged medical records. It wasn’t the only building in need of repair. Mullins took a bunch of pictures and met soon after with his then boss, Dennis Murphy, who is now the company president.

“He asked me to put together a short-term and long-term perspective, and I began to put a business case together for consolidating all of our operations,” Mullins says. “The clear message I wanted to send is that we didn’t need to just replace a warehouse; we needed a true distribution center.”

Mullins says he completed the business case in early 2016. One of his first steps was to expand the operations team. “When I got here, there was just one executive director, and this was a job that was too much for one person,” he says. “I needed the right level of expertise for the new model. That took three months.”

While Alvey’s team was developing procurement best practices around the health system’s needs, Mullins, Lewis and Williams began to develop a plan for a new distribution center. “The three of us had been in organizations with a model similar to what we wanted to develop,” Mullins says. “We knew what good looked like, and we wanted to do better than that.” And, he adds, that while bringing efficiencies and savings was important, those couldn’t come at the expense of patient care. Alvey, for instance, wanted to better manage inventory to reduce or eliminate medical supply stockouts. “Instead of putting in an order for an SKU and finding out that it’s on four weeks backorder, we can now keep four weeks of inventory on the shelf for critical items,” she says. “That improves patient care and sequesters stock for our patients. It allows us to allocate resources and develop a plan prior to running out of items.”

A first criterion was location. “We wanted a location that was good for transportation and also close to the airport so we could get deliveries from FedEx and UPS,” says Williams. When it came to materials handling and order fulfillment technologies, a priority was placed on solutions that enabled piece picking of low unit of measure items at a high rate.

Mullins says that from the beginning, he knew he wanted robotics and goods-to-person picking technologies. As part of its due diligence, the team did visit other healthcare provider facilities as well as facilities operated by companies outside of healthcare, such as Walmart and Amazon. And, they considered other technologies, such as RFID for inventory management and automatic guided vehicles for non-value-added travel.

Williams adds that prior to the site visits, they mapped out their processes as if they already had the technology in place. Some of the facilities they visited had a robotic storage and goods-to-person solution in place. “We visited a large medical supplies distributor in the Midwest to see how they used the solution and visited other facilities to see how they trained their operators to use the system,” he says. “One of the important things is that with the goods-to-person solution, you can train someone in a day.”

The new teams were in place and the systems operable in May of 2018. Part of the training process involved bringing in six experienced associates from the hospitals because they understood the products being handled, and they understood the patient-centered culture. “Our focus is on quality, and connecting our associates to patient care,” Williams says. “We want them to understand that they’re not just picking canned goods. What they do could help their father, their brother or their mother. When we ask our team what keeps them here, they tell us it’s that connection to the patient.”

The system officially went live on July 10, 2018. For the first 45 days, it serviced three hospitals located in one region. The first order was about 200 lines. After that, they brought the remaining hospitals on board and phased out the distributors on a staggered basis. “We had some bumps and bruises as with any go-live,” says Mullins. “But by December 2018, we had all 16 hospitals live, and we’re picking 6,000 lines a day.”

During that six months, Alvey and her team worked to bring manufacturers onboard while winding down relationships with distributors as the implementation rolled out across the network. “Now that we’re working across the network, we can do more around demand planning, contracting and inventory management,” she says.

Similarly, Lewis’s job was to work with the hospitals themselves as they transitioned from working with long-time and trusted vendors to ordering from a brand-new and unfamiliar system. “Initially, they over-ordered because they were afraid of what could happen,” Lewis says. “We accepted that and had to do a lot of planning. Today, they are learning to trust the system. I can’t say enough about the cross-functional planning of our team.”

Today, associates are picking between 150 to 180 lines per hour per person. All told, that translates to an estimated 265,000 units a day. To get started with automation, Indiana University Health is contracting with its solution provider to provide maintenance. “We trained four of our staff members to troubleshoot the robots and goods-to-person stations,” Mullins says. “However, two of our solution provider’s employees work in a nearby hospital to maintain the tubing system, and they’ve been trained to work on the robots. They can be here in an hour if we need them.”

With a year of operations under the new supply chain team’s belt, Mullins says there’s still a lot to be done to roll operations out to doctor’s offices and surgical centers. But, given that logistics represents 37% of the system’s operating costs, supply chain savings are already having an impact. “The model of care is changing and will continue to change,” he says. “Our goal is to be a strategic imperative to the success of Indiana University Health. We’re positioned to do that.”