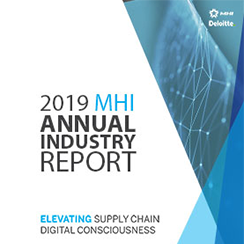 Panelists highlight an industry ready to move forward with the next stages of adopting digital technologies.

MHI released its sixth annual survey-based report at the ProMat conference this week, and it not only shows rising interest in digital technologies like Cloud computing, artificial intelligence (AI), and robotics, but also a sharp increase in spending plans.

A keynote panel discussed the report’s findings Wednesday morning, and panelists highlighted an industry ready to move forward with the next stages of adopting digital technologies.

“I think we are leaving the period of experimentation,” commented panel member Joel Reed, CEO of IAM Robotics.

The 2019 MHI Annual Industry Report is titled “Elevating Supply Chain Digital Consciousness.” The report’s survey results suggest that investment in supply chain innovation is at an inflection point, with a trend of declining investment from 2015 to 2018 being more than countered by a 95% increase in projected spending for 2019.

The labor crunch, which remains the most challenging industry issue in the report, is driving much of the initial adoption of digital technologies. As Kindred AI’s Liefer put it, the labor shortage “creates this place” in which companies simply need to start adopting automation to find efficiencies, at least as an initial focus.  “The potential [for digital technologies] is massive … we’ve just started to scratch the surface,” said Liefer.

Danek-Akey from Penguin Random House agreed that early uses of digital technologies have tended to center around efficiency gains but added that now companies are starting to see how digital technologies can improve on factors such as faster deliveries and cycle times. Increasingly, she added, technology providers are helping companies quantify the value of factors like faster deliveries.

“The pace of supply chain innovation over the six years of our survey is truly astounding, creating real and measurable competitive advantage for early adopters,” commented Prest in a statement about the 2019 report. “With supply chain complexity showing no signs of slowing, the risk of inaction is only growing. Leading manufacturing and supply chain executives agree that technology is the key to future success.”

The report can be downloaded via MHI here. The report includes a Supply Chain Digital Consciousness framework, developed by MHI and Deloitte, to help organizations assess their digital mindset and gauge their progress on the journey to becoming more digitally conscious. As part of this effort, there is an assessment tool companies can use to measure where they are on their digital adoption journey via a Supply Chain Digital Consciousness Index or “Supply Chain DCI.”