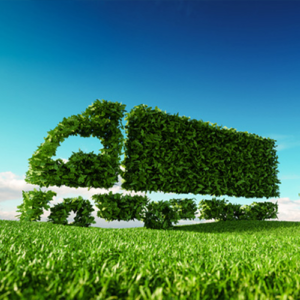 In addition to overcoming the weight penalty of all-battery power, the concept engine is significantly cheaper than diesel units and performs just as well in most operating conditions.

Editor’s Note: Ken Cottrill is Editorial Director of the MIT Center for Transportation & Logistics. He can be contacted at kencott@mit.edu.

In addition to overcoming the weight penalty of all-battery power, the concept engine is significantly cheaper than diesel units and performs just as well in most operating conditions.

In 2017 automaker Tesla appeared to usher in the age of sustainable heavy-duty trucking with its stated plan to start delivering big electric rigs in 2019. That deadline has since slipped, and Tesla’s futuristic semi is now due to begin rolling off production lines in 2020.

Large fleet operators, including Walmart and United Parcel Service, placed orders for Tesla’s new generation of trucks. Other vehicle manufacturers such as Daimler and Volvo have joined the race to phase out the internal combustion engine on long-haul trucking routes.

However, a problem that needs to be overcome is that powering 18-wheelers electrically requires hefty batteries. Leslie Bromberg, Principal Research Engineer at PFSC, estimates that the battery packs needed to power long-range tractor-trailers will weigh 10 tons to 15 tons – a significant slice of the vehicle’s payload.

That handicap in combination with other issues such as limited charging infrastructure and the time it takes to recharge large-size batteries could relegate battery-powered tractor-trailers to shorter routes. Moreover, even though battery technology is developing apace, it will be many years before a viable power unit for heavy-duty trucks is available, says Bromberg.

He believes that using PFSC’s hybrid engine to charge an onboard battery offers an interim solution that could start long-haul trucking on an emissions-free path.

The new engine is designed to run on gasoline, ethanol, methanol or a blend of these fuels. Gasoline engine technology has evolved to a point where it is comparable to diesel on performance and cost, with much lower NOx emissions. The flex-fuel option is also cleaner than diesel in terms of greenhouse gas and particulate emissions.

Additionally, the hybrid system uses relatively clean spark ignition – as opposed to diesel’s compression ignition – technology. Spark ignition engines are stoichiometric (i.e., they run with the right amount of air needed to combust all the fuel) and can take advantage of catalytic converters that are more efficient than the exhaust cleaning systems used in diesel engines. Bromberg’s team estimates that their engine produces one-tenth of the air pollution generated by conventional 18-wheelers.

Importantly, the hybrid-based powertrain is lighter and cheaper than its diesel equivalent. It could cut the price of a heavy-duty truck by $15,000 to $20,000. The hybrid might also become an attractive choice for truck owners and operators under pressure to comply with increasingly stringent emissions standards.

One downside is that maintenance costs are slightly higher for the flex-fuel engine. However, an analysis carried out by PFSC shows that the hybrid is economically feasible on long-haul routes.

The way the engine is deployed depends, to a large extent, on the rationale for introducing it. The wide availability of gasoline is a big plus for gas-powered units. However, burning methanol or ethanol produces lower levels of greenhouse gases, and if these fuels are derived from renewable sources such as agricultural waste, the environmental premium is even higher.

Bromberg says that countries such as China and India are especially interested in using methanol as a fuel, and are looking at developing the infrastructure they need to make the fuel viable for large-scale commercial use such as trucking. PFSC is currently working with an organization on such a solution, Bromberg says.

Another advantage of the hybrid engine is that as low-emission trucking continues to evolve and different solutions emerge, it is highly adaptable. The engine can recharge various types of batteries using different combinations of fuels. Alternatively, the batteries can be recharged by a wide range of generators, including fuel cells.

The operational gains are less clear cut. “How can flexibly powered, heavy-duty vehicles like these allow commercial drivers to move more efficiently across the country” compared to established diesel trucks, asks David Correll, a Research Scientist at MIT CTL. He is looking at the utilization of trucks as part of research underway at MIT CTL’s FreightLab.

One advantage is that lowering the cost of a truck is beneficial for shippers and carriers, and especially owner/operator small businesses that operate on low margins. Also, carriers that comply with stricter emissions regulations and align with shippers’ sustainability targets might have more options when looking for loads.

But the ultimate goal is to make long-haul electric trucks commercially viable. A plug-in hybrid engine could be a bridge to that future.