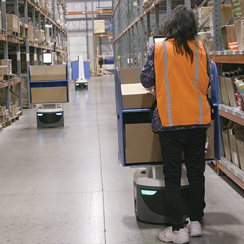 Robots, including autonomous mobile robots (AMRs), are seeing rapid uptake in warehouses. The labor crunch and the ability of AMRs to offload manual travel are central to their take-off, but there are other benefits to robotics besides reducing the labor requirement.

Robotics for distribution centers (DCs), such as autonomous mobile robots (AMRs) and collaborative picking arms, are growing at a rapid rate, with well over a dozen robotics vendors aiming at the needs of DC operators. At the same time, U.S. unemployment was running at 4% or under for the first few months of 2019, dipping to 3.6% in April.

The two trends are interwoven, with labor scarcity seen as a primary driver for this market.

But let’s not get carried away with misconceptions. “Lights-out” DCs, where human workers are eliminated, is not where the trend is headed say most vendors. Another misconception: robotics can’t be combined with more traditional “fixed” forms of warehouse automation. In reality, there are plenty of nuances to the robotics trend, including their ability to collaborate with humans, and the ability of some bots to hand off goods to fixed automation.

For certain, the growth outlook for robotics in DCs is robust. According to analysis by ABI Research, by 2025, more than 4 million commercial robots will be installed in more than 50,000 warehouses, up from 4,000 warehouses using robots in 2018. The ABI study looked mainly at AMRs, but also considered picking arms, autonomous lift trucks, and some types of automated guided vehicles.

Analyst firm IDC, in a study from December 2018, forecast that robotics spending across industries would be $103.4 billion worldwide in 2019, representing a compound annual growth rate (CAGR) of 18.9% over 2018. While IDC doesn’t forecast just for AMRs in warehousing, it does predict robotics for materials handling workflows such as “pick and pack,” says John Santagate, an IDC research director. For the five-year period 2018 to 2023, IDC forecasts a 22.4 CAGR for pick and pack robotics, culminating in more than $9 billion in spending by 2023.

There are several reasons for such rapid growth, says Santagate, starting with the fact that material movement via manual methods is a huge labor drain. “If you can automate the movement of material, you may still have the wasted movement, but you are freeing your human resources to focus on other tasks,” he says.

This confluence of time-consuming material moves, macroeconomic factors creating labor scarcity, and rapidly advancing robotics technology, is fueling the market. “Perhaps most importantly, the technology has reached a point where it is reliable and safe to use,” says Santagate.

GreyOrange offers multiple types of robots, including a good-to-person system that brings goods needed to fill orders to a light-driven, pick/put station where a human can pick orders. This cuts out nearly all the travel involved in more manual order picking, says Barber.

“The number one value users get is that [robotics] eliminates the time that human workers have to spend walking, which isn’t a directly value-added activity like picking is,” says Barber. “With robotics, the human operators are no longer spending most of their time walking around—they’re actually picking.”

Because DCs face such a serious labor crunch, efficiencies gained by having robots handle travel and material moves doesn’t so much eliminate jobs as it allows warehouse workforce to do other value-added tasks, while making human workers at light-driven pick stations highly productive. Users of GreyOrange’s solutions include third-party logistics (3PL) provider XPO Logistics, which has deployed the bots in multiple DCs.

It’s now possible to pair up a good-to-person AMR solution with a collaborative picking arm at a pick/put station to augment human associates at the pick station, says Barber. For the associates, it becomes a better work assignment because rather than walking miles per shift, they can stay at a more comfortable work cell and gain experience working with AMRs. “When you put robots into warehouses it’s typically a better working environment for the human workers,” says Barber.

Not all AMRs function alike. Some solutions work on a good-to-person principle, bringing rolling shelves with goods to a workstation, while others work in aisles alongside humans, and others handle material transfer tasks. There are also mobile robots with sorter mechanisms or roller conveyor attachments on top, making it possible for a bot to transfer goods to fixed automation. Another variation are mobile bots that have a picking arm attachment. The exact methods and order fulfillment logic will vary within these types, but generally, AMRs aim at eliminating or drastically reducing the labor requirement.

The high market interest in robotics has led to well over a dozen vendors focused on mobile robots for the warehouse, robotics offerings from major warehouse automation providers, as well as continued involvement from Amazon, which recently acquired robotics vendor Canvas Technology.

The increasing difficulties that DC operators are having finding enough associates, combined with the rapid maturity of sensor and guidance technology, are driving a strong market, vendors agree. “The huge driver for us is the labor challenge operations are facing,” says Karen Leavitt, chief marketing officer for Locus Robotics, an AMR vendor. “Getting labor has become increasingly difficult with ecommerce growing at leaps and bounds, and also because warehouse fulfillment is such a highly seasonal business.”

Leavitt agrees with the idea that AMRs are about making the human labor you can find more productive, rather than eliminating jobs. With Locus, she adds, its bots work in concert with human pickers, guiding them through picks and drastically reducing travel by the workers. According to Leavitt, it’s common for user operations to see a two- to three-fold productivity improvement for each human picker, due to the guidance from the bots and elimination of most travel.

Locus already has two dozen installations of its AMRs, representing hundreds of bots, with one site running at least 70 bots normally, and as many as 120 during peak season. For the users, says Leavitt, the software and the guidance features on the bots create a productive interplay. “What we hear from our customers is that for their workers, [robotics] is like working with another co-worker that just happens to be a robot,” says Leavitt. “There is a very natural rhythm between the human and the technology.”

Another robotics vendor whose mobile bots work alongside humans is 6 River Systems. According to Fergal Glynn, vice president of Marketing for 6 River, a 200% to 300% productivity improvement is the typical improvement range in deployments, though levels vary depending on how well the previous process was working.

What’s more, he adds, with AMRs such as 6 River Systems’ solution, there is no special shelving required, which helps with rapid return on investment (ROI). “There is always a human involved with the solutions we provide,” says Glynn. “By keeping that human element and making it more efficient, we’re able to deliver technology at a low cost so that the rapid ROI is there for our customers.”

Even when a mobile bot has an integrated picking arm, and can do the actual picking autonomously, as is the case with bots from IAM Robotics, people still play a role, notes Tom Galluzzo, founder and chief technology officer for IAM Robotics. Using its picking arm and item detection intelligence, IAM’s bots can pick on their own, although there is one “robot supervisor” person for up to eight bots, and the shelves are replenished by warehouse associates.

The ability of IAM’s robots to pick 200 to 300 items per hour, makes for an efficient operation with less manual work involved, says Galluzzo. “The people who work with our robots have to do less manual work, while the robots do more of the manual work,” he says. “We’re quite excited by the fact we are able to offer people job upgrades [as robot supervisors] and make the warehouse more efficient, so that overall, the prosperity of the operation goes up.”

While mobile robots in some cases have hardware features that allow the bots to instruct or otherwise collaborate with humans, the secret to effective bot-to-human collaboration is the robotics software platform, says Leavitt. In the case of the type of collaborative multi-bot solution Locus offers, the software is responsible for ensuring that workers don’t have to travel far picks, can interleave restocking and picking activity, or that picks for multiple channels can be combined. “For all their cool physical manifestations, mobile robots are about 90% software,” says Leavitt.

Barber agrees the secret sauce with AMRs is the software. For example, he explains, with GreyOrange’s good-to-person system, the software analyzes order patterns so that stock keeping units with are frequently ordered together (an “affinity” relationship) are stored in the same shelf unit or very close to each other.

“It’s really the software that is the brains of a robotics operation to allow for high efficiency,” says Barber. “We have artificial intelligence and machine learning technology that is able to consider multiple inputs—customer order patterns, what’s currently in stock, and how many [robotic] assets you have in the building—to make the picking as efficient as possible.”

As Glynn sees it, a good software platform is central to AMR efficiencies. The Six River System solution, he explains, can be thought of robotic zone picking with a directed workflow. Hardware features on the bot such as a flat screen support the directed workflow, but it is the software that dynamically manages zones and sequences the pick activity. “If you can have software manage the zone, then the software will move the robots and the people into the area of the building where the work can take place in the most efficient way,” Glynn says.

Robotics providers say a major plus for AMR solutions is there high degree of flexibility and scalability. AMRs scale quickly by adding more units, which is made easier on budgets via “robotics as a service” payments. Vendors also point out that rather than replacing all existing automation, AMRs often work in combination with fixed automation.

AMRs not only work in piece pick locations near pack out areas, some are capable of transporting and handing off goods to other systems in a DC, notes Melonee Wise, CEO of Fetch Robotics. “We’re able to move everything from pieces to pallets [with our robots], and how we interact with different machinery is based on the attachment or accessory on the top of the robot,” says Wise. “If you look at how we interact with those [fixed automation systems], we typically bring material to those systems. There are many other warehouse processes in addition to e-commerce order picking with which mobile robots can assist.”

In its simplest deployments, says Wise, Fetch AMRs can be deployed without integration to a warehouse management system or warehouse control system, using bar code scans to trigger a bot to move goods. Even with integration to other systems, says Wise, it’s possible to deploy an AMR solution rapidly, without adding special infrastructure beyond the bots.

“We use the term on demand automation, which to us, means rapid deployment, extreme flexibility, no IT overhead and the ability to scale easily,” Wise says.

AMR vendors also stress that it’s easy to move units between DCs as needed, or add a new workflows just by adjusting some software or downloading digital map data for a new portion of a facility. Finally, while the ability of AMR’s to slash labor-consuming travel time is a core driver in the market, vendors also say that by deploying AMRs, operations should also see high order accuracy, and have a software platform that is constantly learning how to improve operations.

These platforms typically govern how to best sequence picks and movements to reduce travel, and also will adjust slotting or other inventory location decisions to maximize pick density. “With robotics, what happens is that the software can slot the warehouse dynamically, without anybody having to do anything,” says Barber. “It’s really the software that understands the little nuances to order fulfillment that are going to drive productivity and maximize storage density as well.”