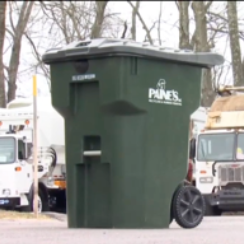 New reinforced trash barrels will soon be available for residents in Simsbury.

The bears are out again and searching for food, and often they end up knocking over trash barrels and making a mess for homeowners. One trash hauler thinks it has found a solution.

“It’s really eye-opening how clever they are to figure how to get into the barrels,” Mike Paine, president of Paine’s Inc., said.

For several years, Paine has been trying to find a solution for his customers. And now he thinks he’s got something that is bear-resistant.

On Tuesday, he showed NBC Connecticut new reinforced barrels that will soon roll out.

Another feature only allows the lid to open automatically when it’s lifted by the garbage truck or if someone manually does it.

Before deciding to try them out, Paine talked with other trash haulers.

“None of them have specifically done this. They were happy to let us try to be the guinea pig. But I think it’s going to work really well,” Paine said.

In a month or so Paine’s will launch a pilot program with the barrels in Simsbury. There will be an additional fee for the new barrels which has not yet been decided.

Depending on how they work in Simsbury, Paine’s hopes to expand them to other communities it serves.

On Tuesday, Simsbury resident Amanda McCabe had a close encounter with a bear.

She drove into her garage and parked her car with her 3-month old in it.

“I came home. The baby was asleep. So I thought I’ll sit here for a few minutes. I was sitting here and I just turn and he was right here,” McCabe said.

McCabe says a bear had wandered into the garage.

“Panic a little bit. I was like don’t freak out,” McCabe said.

Her video shows the bear knocking over the barrel which was in the garage and then taking the trash out.

It’s part of why McCabe is intrigued by the new barrel that will soon be available.

“Yeah, definitely. Because even when you leave them out on trash night they’ll get into them and have it scattered all over,” McCabe said.