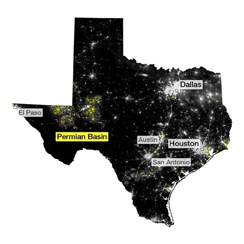 Over the years, business applications have been consuming more and more data. In the supply chain realm, demand management applications are ingesting more downstream data and external data sets to improve forecasting. As ELD has become more prevalent, tracking of trucks has improved delivery visibility. We have also entered an era where it is becoming possible to detect supply chain risks much more quickly by continuously monitoring risks identified across hundreds of thousands online and social media sources.

Satellite imagery data represents another data set that may have the potential to improve company’s supply chains. Mark Johnson, the CEO of Descartes Labs, talked to me about the solution his company has built. Descartes Labs, headquartered in Santa Fe New Mexico, was launched as a spin-out from Los Alamos National Laboratory in 2015. The underlying technology uses computer vision, machine learning, and cloud-based infrastructure to teach computers better interpret satellite imagery. There are currently 16 petabytes of satellite imagery and weather data available for analysis.

Initially, the technology was applied to develop an agricultural model to analyze corn production in the United States. While the USDA makes these forecasts as well based on surveying farmers and statistical methods, they wanted to prove the viability of making similar predictions using satellite imagery. With the USDA, there is a ten-day gap between collecting the data, agronomists and statisticians analyzing it, and releasing it. “We did this with a small team of physicists and lots of data,” Mr. Johnson explained. “The model moved prices 3% when it was released.” It ended up doing well in terms of the accuracy of the prediction.

What are the supply chain implications? The implications are more obvious for companies that trade or procure food stuffs and other basic commodities in large quantities. By understanding the likely global yield of a commodity, a procurement analyst can predict whether prices for the commodity are apt to move up or down.

I asked Descartes Labs planned to productize the solution or would the company focus on creating custom applications for specific customers. Mr. Johnson stated that there is more value for potential customers if they have custom applications. If many players in an industry have the same data, that data becomes commoditized. If just one player in an industry has it, the potential first mover advantages in procurement could be massive.

But there are other applications for satellite data as well. Recently, the Descartes Lab team was able to uncover that soybeans were being re-routed from Asia to South American because of the China tariffs. When it comes to global trade, companies involved in diversions, can be subject to huge fines. Even firms that claim they were unknowingly part of these diversions can face liability.

And the solution can be used for helping to create strategic plans focused on capital investments that will occur over a five-year or longer period. For example, an oil company might want to forecast the growth of wind as an alternative energy source. Using high-resolution Airbus imagery, Descartes Labs was able to build a computer vision model that identified all physical wind turbine assets worldwide. This solution, the company claims, automated analysis that would have taken a fleet of human analysts several months to complete.

Mr. Johnson mentioned that they have also begun to have sustainability discussions with some global multinationals. If a company is buying soybeans from Brazil, for example, the company can see where the fields they are buying from are located today, and whether those fields were covered by a rain forest one year ago. Similarly, imagery can detect methane leaks in the Permian basin. Depending on what global multinationals have promised in their sustainability reports, this analysis can help companies get ahead of, or even avoid, bad news.

In the years to come, we will hear about more and more data sources being used to improve supply chain management. The use of satellite imagery was not a data source that occurred to me. But it seems obvious once the implications are explained.