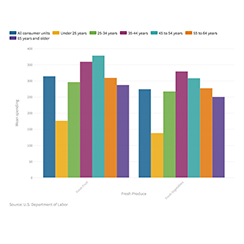 Spending on fruits and vegetables up in 2017, but less than total food increase

Consumer expenditures on fruit and vegetables took a jump in 2017, but not as much as the percentage hike in overall spending on food.

The U.S. Department of Labor’s Bureau of Labor Statistics has released its 2017 Consumer Expenditures report

The data showed that spending on fruits and vegetables totaled $837 in 2017, an increase of 6.9% compared with 2016. That compares a 7.3% increase in spending on all food, according to the report.

The spreadsheets in the report also isolate spending on fresh fruits and vegetables across a number of demographics.

Not surprisingly, the report said that top spenders on fresh produce were top earners. Consumers making more than $200,000 per year spent an average of $529 on fresh vegetables, compared with $140 for those making less than $15,000. But consider the consumer making less than $15,000 was spending 0.6% of income on fresh vegetables, compared with 0.3% for the consumer making more than $200,000.

There is more micro-analysis where that came from. The report shows spreadsheets for spending by income before taxes by quintile, decile, and range; age of the reference person; size of the consumer unit; composition of the consumer unit; number of earners; housing tenure (homeowner or renter) and type of area (urban or rural); region of residence; occupation; highest education level of any consumer unit member; race; Hispanic or Latino origin; and generation of reference person.

Perhaps more data than can be absorbed, true.

Yet the Consumer Expenditures report is another set of market data the industry can gain insights from, and it reminds me of a conversation last night here at the Produce for Better Health Consumer Connections Conference in Scottsdale. One industry leader said consumer research that has been sponsored by PBH over the years and available for review on their website is an absolute treasure trove of information for produce marketers who pay attention. Inquiring minds, you know, get the worm.