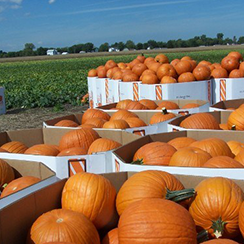 Halloween is a mere two weeks away, and the shopping season is in full swing. And by “in full swing,” I mean that consumers are spending big bucks on all the Halloween essentials. According to the National Retail Federation’s (NRF) annual survey conducted by Prosper Insights & Analytics, Halloween spending is expected to exceed $9 billion. With more than 175 million people planning on celebrating the holiday this year, that equates to an average spend of $86.79 per person, which is up about 60 cents over last year. As consumers get ready to dish out money on costumes, candy, decorations, and greeting cards, the Halloween supply chain is busy.

The NRF is projecting total Halloween spending to reach $9 billion this year in the US. For the 175 million consumers that plan to celebrate the holiday, 95 percent will buy candy, 74 percent will buy decorations, 68 percent will buy costumes, and 35 percent will buy greeting cards. Based on these numbers, American consumers will spend $2.6 billion on candy. Not surprisingly, Halloween is the biggest holiday for candy, followed by Easter and Valentine’s Day. The candy market ebbs and flows throughout the year, and seasonal spikes can be difficult for supply chains to manage. There are more raw materials that need to be procured, more candy that needs to be manufactured, and more candy that needs to be transported to retailers. The majority of retailers that sell candy begin to stock up in the middle of September. This move makes sense as how much Halloween candy bought in September makes it to October 31 anyway? But the candy supply chain ramps up for this six-week blitz. And if the supply chain gets disrupted, this causes major problems. The majority of candy that remains unsold will simply be marked down the week after Halloween.

American consumers will spend $2.7 billion on decorations. This includes home and yard decorations including pumpkins. According to the NRF’s survey, 45 percent of Halloween celebrants will carve pumpkins. While many farms offer “pick your own” pumpkins, large retailers also have them available for purchase. I have seen reports that Americans will spend $575 million on pumpkins for jack-o-lantern carving alone. This number is actually down from just over $618 million last year, but that is mainly due to the price of pumpkins dropping in 2018. With lower prices, it is not surprising to see so many consumers buying pumpkins. Added demand can put a strain on the supply chain. And while nothing says Halloween like a freshly carved jack-o-lantern, the pumpkin supply chain is more complex than simply selling the gourds to carving-happy consumers. This time of year, pumpkins are used for everything you can imagine, from lattes and beer to bread and muffins. This is another facet of the pumpkin supply chain that often goes overlooked.

Throughout the year, there are stores that focus their merchandise assortment on the holiday schedule, such as Party City. The themes and merchandise are constantly changing depending on the season and upcoming holidays. From September through the end of October, the majority of space in the store is reserved for Halloween sales. Once Halloween is over, these types of stores revert back to their normal assortment mix and wait for the next big holiday to change things up. However, specialty costume stores are becoming a larger part of the Halloween experience. These stores operate for about two months a year, then shut down until next Halloween. This makes for a tricky supply chain.

I recently read an article about Spirit Halloween, one of the country’s largest Halloween specialty stores with over 1,300 locations. The pop-up store opens in late August and is closed by November 2, shuttering its doors until next year. The company spends the majority of the year doing two essential things: scoping out locations and monitoring Halloween trends to assure it has the right assortment mix. With the economy continuing to rebound, vacant spaces are becoming harder to come by. For this reason, the layout and location of any given store will change from year to year. Operating a store for such a short period of time, and meeting extreme deadlines, can put added strain on the supply chain. If the store does not have the costume a consumer wants, they will go elsewhere. There is simply not time to wait around for additional stock to arrive. Luckily, unlike candy, Spirit Halloween is able to hang on to excess merchandise for the following year. This helps to alleviate some of the strain, especially for costumes that are always in demand year after year.

The Halloween rush also marks an important time for retailers – the holiday season. While consumers generally think about the holiday season as beginning right after Thanksgiving, the planning and execution begins now. Retailers are busy importing merchandise they will need for the holiday rush. However, with the trade war looming with China, timing is more important than ever. While many costumes and Halloween accessories are made in China, so are toys and electronics needed for the holiday season. As tariff deadlines loom, retailers are stocking up early to avoid higher prices in the coming months. The increase in imports puts a strain on transportation and warehouse operations as retailers get ready for the season ahead. But this is a topic I will tackle later in the year as part of my holiday planning guide.

With Halloween a fortnight away, supply chain operations are being put to the test. Consumers will spend $9 billion on costumes, pumpkins, decorations, candy, and greeting cards this year. As a result, logistics professionals have been busy and will continue to be busy for the foreseeable future. With more than 175 million American consumers ready to celebrate Halloween, the supply chain is bustling. However, this is all a good warm-up for the coming months, as we hit the holiday season, and the supply chain gets pushed to the limit.