The Physics of Drafting in the Tour de France

Power is the most important thing in road bicycle racing like the Tour de France. If you want to move along on a bike at a constant speed, you have to use energy. There are no free rides. But there is one thing that can make a big difference in a rider’s energy use—and that’s another rider. By cycling very close behind another rider moving at the same speed, a human can get an advantage. We call this drafting. Now, to show how it works!

Here is a force diagram for a cyclist riding along at a constant speed on flat ground. 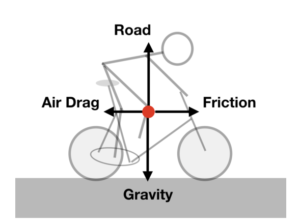 For an object (any object) moving at a constant speed there must be zero total force—that’s just the way physics works. In this case there is the gravitational force pulling down on the bike (plus rider) along with the force of the road pushing up. These two forces have the same magnitude such that the bike doesn’t accelerate up or down (which is good, because a bike flying off the road would look odd). These forces aren’t really the problem.

In the horizontal direction, the force that a rider has to deal with is the air drag force. You know more about air drag than you think. Just stick your hand out of a moving car window and you can feel this force as it pushes back on your hand. The faster you move through the air, the greater this force. On a bike you have to push against this air in order to move at constant speed. Really, this forward-pushing force is due to friction between the tires and road, but you could consider the human rider as the ultimate source of the force.

The most common model for the air drag force has it proportional to the square of the rider’s speed.

The air drag force also depends on other stuff—like the density of the air and the size and shape of the object. Really, air drag is some pretty complicated stuff. However, for this case I am just putting all that “other stuff” in the coefficient C.

Now for some more physics—the definition of work. If a force is pushing on an object over some distance, that force does “work” (which could change the energy of the object). Work is defined as:

In this expression, F is the force, s is the distance over which the force moves, and θ is the angle between the force and the displacement. Since the friction force is pushing in the same direction as the motion of the bike, θ is zero and the cosine of zero is 1.

So as a human rides along, the human has to push with some force over some distance, and this takes energy. But what about power? Power is the rate at which something uses energy. Since I am talking about the work done by the human, I can define power as: 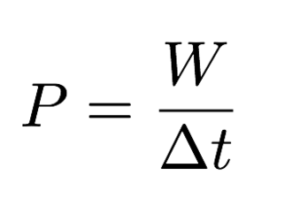 This looks complicated, but it’s really not too bad. The distance divided by the change in time is just the speed of the rider. But the force also depends on the speed, so if I put the expression for air drag in here, I get:

And there is your problem with power. The power needed to move at a constant speed is proportional to the velocity raised to the third power. So doubling your speed would increase your required power by a factor of eight. That’s a big deal. This is why riders wear tight clothes and crouch down on their bikes instead of riding upright. Both of these actions decrease the drag coefficient to reduce the drag force (and thus reduce the power requirement).

You could decrease your power by slowing down, but you probably wouldn’t win the Tour de France by going slow. That means the only way to win is to either increase power output or decrease the air drag in some other way. Here is where another rider comes in handy. Just imagine that you could see the air as a cyclist rides by. The bike and human push this air in very complicated ways, but they don’t leave the air undisturbed. Instead, there is a trail of turbulent air behind the rider. This turbulent air is easier to move through than plain air, thus decreasing the drag force on the trailing rider. Drafting decreases the overall power needed to ride at a constant speed or allows a rider to go slightly faster with the same power.

You might think the change in air drag behind a small profile like a bike is small, and it is certainly not as significant as drafting behind a large truck. However, this is a race. Every little factor can make the difference between winning and not winning.

Oh, and if drafting behind one bike can help a rider a noticeable amount, just imagine if a bike was behind 10 riders. The power savings can be quite significant. This is the idea of the peloton—the large group of riders that stays together. It is much easier to keep pace with riders while in the peloton—but it’s pretty hard to win a race if you are in the middle of the group. If you want to win, you have to break out of the pack and make a move on your own or with just a couple of other riders. Honestly, the strategy of drafting is what makes the Tour de France so interesting to watch.