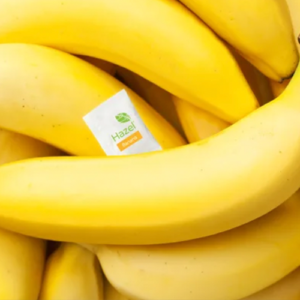 Hazel’s little sachets block ethylene, the chemical that ripens fruit, drastically prolonging their life as they’re shipped across the country.

This tiny sachet the size of a sugar packet can be placed in a crate of fruit and it makes the produce last roughly three times longer than usual. The technology, from a startup called Hazel Technologies, was created as a simple way to tackle one piece of the world’s problem with food waste. In the U.S. alone, each year, $218 billion is spent growing, processing, delivering, and throwing out 52 million tons of uneaten food, often because it goes bad before someone can eat it. Another 10 million tons of food never makes it off farms.

“Agriculture is central to human existence, but despite that, we haven’t had nearly the same level of technological revolutions that we have in other world systems like energy or transportation or medicine,” says Aidan Mouat, the CEO of Hazel Technologies. “So I saw a real opportunity there.”

Mouat cofounded the company as a postdoctoral student at Northwestern University. A fellow student and cofounder was studying a way to control the pathways that make produce ripen and eventually decay by mimicking the natural process; Mouat was studying the use of biodegradable, nontoxic materials that could control the same type of material. They decided to work together, along with a group of other students.

The sachet, one of the company’s first products, works by inhibiting ethylene, a hormone molecule that fruit naturally emits and that triggers the aging process. It’s something that the food industry already tries to control—some storage facilities use machinery to filter ethylene out of the air or apply a coating to fruit or vegetables. But the tiny packets are simpler to use. A quarter gram of the material inside the packet can protect 50 pounds of produce. The chemicals are proprietary, but the company says that the sachet time releases them to help preserve the product. Each fruit has a different package based on the ethylene sensitivity of the fruit. Other products might need different products entirely: berries need antimicrobials, for instance, but don’t have a problem with ethylene.

“Without putting a chemical on the food—it’s not a contact system, there’s no spray—and without leaving any residue on the food, we’re able to use the atmosphere around the food to stop its response to this hormone,” Mouat says. “And as a result, we can literally control the metabolic rate of the produce. By doing so, we can keep it in good shape longer.” In the developing world, where food often goes bad before it gets to market because of a lack of refrigeration, the product could help food last longer without the need for electricity or expensive equipment.

For fruit like bananas, which go through a complicated logistics process—shipped green from a plantation, and then placed in a ripening room at a distribution center before being shipping to retailers—the technology could help bananas last as long as 14 days on the shelf instead of two or three. For some growers, it’s a way to reach new markets. The company is working with an avocado grower in the Dominican Republic, for example, that can now deliver fruit to Europe, meaning that it can sell more of the food that it grows. “If you ask a consumer what’s sustainable, they’re going to say, ‘Oh, I want this from as close by as possible,’” Mouat says. “But if you talk to as a grower or packer, they’ll tell you, ‘Well, for me, sustainability means selling every single piece of fruit that I grow. And if I don’t do that, then I’m wasting fruit because it’s going to lie in the fields going to waste.’”

Several other companies are also developing new ways to make produce last. Apeel makes an edible coating that can protect fruit like avocadoes. StixFresh makes a sticker that protects produce with the same metabolites that plants use to protect themselves. Bluapple makes an apple-shaped device that consumers can use in the refrigerator to keep fruit longer. AgroFresh makes multiple products, including a sachet similar to the one that Hazel makes.

Hazel, which raised $13 million in a Series B round in August, currently works with more than 100 large growers, packers, and retailers and is developing new solutions for different types of food, including packaged chicken and beef, and new markets, including products that consumers can use at home and that retailers can use on store shelves. (Supermarkets in the U.S. lose around $15 billion in wasted produce each year.) To date, it estimates that it has treated around 900 million pounds of produce, preventing around 130 million pounds of waste—and avoiding more than 100,000 metric tons of CO2 emissions.