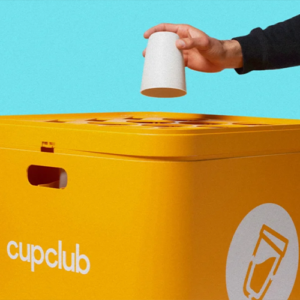 This coffee cup can be reused 132 times. Here’s how to try one

Feel guilty about tossing your cup every day? CupClub has a plan.

Award-winning architect Safia Qureshi—who spent most of her career designing luxury apartments and high-end spaces like private gyms—decided to redirect her training to invent a better alternative to the disposable paper cup sold by coffee shops around the world. “For me, the biggest motivator to leave architecture was to be able to design things that a lot of different people could use, rather than just one specific wealthy socioeconomic class,” she says. “I wanted to explore, build, and develop things that anybody could be use.”

Six years ago, along with fellow architect Maxwell Mutanda, she cofounded the London-based firm Studio [D] Tale, which uses design to create high-impact change in cities. And four years ago, they turned their attention to inventing a circular system for cups that would be easily adopted by both coffee shops and coffee drinkers.

At the time, plastic wasn’t such a widespread concern. But Qureshi had a sense that a tipping point would come soon. “I could see that the plastics epidemic would soon become a tremendous problem,” she says. “By virtue of being an architect designing for cities, we’re used to thinking about the problems that people will be dealing with in the future, 5 to 10 years down the line. So we made the big decision to make this our focus.”

THE PROBLEM WITH COFFEE CUPS

There have been some efforts to make drinking coffee on the go more sustainable, including some cup-sharing programs that already exist. While some eco-friendly people carry their own reusable cups to coffee shops, it has proven difficult to get all consumers to make the switch. “To change people’s behavior, we need to make it easy for them,” Qureshi says. “We need to eliminate all the things they currently feel they don’t want to do, which is to remember to bring their cup in, then remember to wash it when you get home, put it in your bag, then do the same thing again and again, day after day.”

Recycling existing paper cups, meanwhile, is close to impossible. “The plastic liner on the inside of the cup and the paper liner on the outside are sealed together,” Qureshi says. “Any time you combine materials, you make it nearly impossible to separate and recycle it. That’s why using single materials is critical.”

To actually effect change, Qureshi believes it’s necessary to create a totally new system—something familiar to architects. “Architecture is really all about problem-solving and finding solutions that bring many complex pieces together,” she says. “My training gives me a schematic that informs how I think about problems.”

PACKAGING AS A SERVICE

Qureshi’s aha moment came to her one day on her morning commute. She noticed three friends sitting on the London tube together with identical, very stylish coffee cups that they drank on the way to work. Then, when they arrived at their stop, they got out and all threw their cups in a trash can on the train’s platform. That’s when it occurred to her that it would be possible to create a circular system where you threw out your used cup into a collection center, rather than the trash: It would be just as convenient as the status quo, but without any waste. “There’s a lot of effort that goes into making paper cups look pretty, almost like a luxury product,” she says. “But why not go all the way? Why not take that design thinking and create a product that can be returned and reused?”

In June 2019, she launched a new business called CupClub, which creates plastic cups designed to be used by coffee shops. Each cup can be used 132 times before it is recycled. There are cup drop-off points throughout London—primarily at other coffee shops—so when someone is done with their drink, they can simply toss it in one of these bins. Every day, CupClub collects these used cups, cleans them using industrial dishwashers, then redistributes them to coffee shops. In addition to diverting waste from landfills, Qureshi calculates that the system uses half of the carbon that a disposable cup uses.

While this system seems new and radical in modern urban centers, there are many places where this works well. In India, for instance, chai stands sell tea in stainless steel cups; people drink it on the street, then the sellers pick them up and wash them. In some markets around the world, including South Asia, Coca-Cola sends their beverages to distributors in glass bottles, who then collect, wash, and refill them. In these cultures, the idea of returning a container has been normalized, and Qureshi believes the same could happen with CupClub. Over the past two months, several London-based coffee shops have adopted this new system, and already more than 100,000 coffee cups have been diverted from landfills. Qureshi says the program is cost-neutral for coffee shops once waste disposal is factored in. CupClub aims to serve 6 million drinks in its first year. “We think of this business as packaging as a service,” Qureshi says.

Quereshi makes the cups and lid out of low-density polypropylene, which is fully recyclable. The cups are sleek and white, and have a similar shape and size to disposable cups on the market. But CupClub also has the challenge of tracking these cups once they are out in the world. To this end, each cup is fitted with an RFID chip that makes it identifiable throughout its entire life cycle.

Customers need to opt in to be part of CupClub. They download an app, and whenever they are at a coffee shop that makes these cups available, they can use the service. If they somehow don’t return the cup after several days, CupClub assumes the customer wants to keep the cup and they are charged $3 for it. “We make it very clear from the onset when people download it,” Qureshi says. “We explain that we’re super passionate about saving the planet, but we need you to return the cup for the system to work.”

Quereshi has found that many consumers are excited to be part of a system like CupClub, even though there are consequences for not returning the cups. These tend to be consumers who are eco-conscious and are concerned about the waste they generate. And as concerns about sustainability grow around the world, this is increasingly becoming a large contingent of the population.

Going forward, Qureshi believes the CupClub model could work for other products as well. In general, it tends to work as an alternative for disposable products that people consume quickly, in about 20 minutes, so it is relatively easy to collect—think food containers, salad bowls, and single-use silverware. “Now that we’ve created the infrastructure, we can apply it to many other products,” she says. “We know that single-use containers can be re-appropriated and reused many times.”