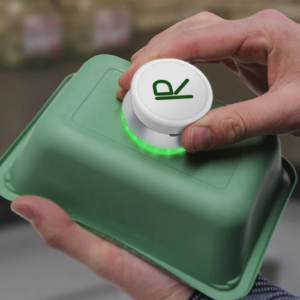 This concept device could help end confusion about what bin to put your trash in—and take some pressure off our failing recycling system.

One of the challenges in the broken recycling system is basic confusion: It often isn’t obvious what a particular package is made from or whether it should go in a recycling bin or the trash. Items that could be recycled end up in the landfill, and recycling companies have to expend a lot of time and effort removing unrecyclable items from their facilities. While some brands start to adopt better labeling, a U.K.-based design firm is testing another solution—a simple device that you can point at an object to automatically identify its recyclability.

The gadget, called R.I.D. (Recycling Identification Device), uses near-infrared spectrometry technology that beams invisible light at an object; because different materials absorb different wavelengths of light, it’s possible to identify materials. “The distinguishing characteristics of a material are unique,” says Jack Hands, a designer at Cohda, where a team designed and tested a prototype of the device. “We have been referring to it as a ‘digital fingerprint,’ so as the database of these identities develops, the materials will be independently recognizable.”

When someone holds the device up to a plastic container, the gadget lights up or buzzes to indicate if the material is recyclable or not. The designers suggest that cities could give the gadgets out to households along with an updatable RFID card that hangs on the recycling bin with data about what’s locally recyclable. The whole system is low-cost and doesn’t involve apps or any need for an internet connection. It could be useful even when waste is well-labeled, since what’s recyclable in one city might not be in the next. “Even knowing the plastic used isn’t enough . . . the materials that can be recycled vary from region to region on the capabilities of the local recycling centers,” says Hands. It’s common that plastic that isn’t recyclable ends up in the recycling system, adding cost to the process, and also common that items that are recyclable end up in landfills. By one estimate, of the 8.3 billion-plus tons of plastic that humans have produced, around 6.3 billion tons weren’t recycled.

The design is just a concept, but the firm hopes to work with the government to help get it made. They also want people to think more about the problem. “Our main priority for the project and sharing it is to highlight a current issue and show how taking a personal responsibility for our own waste is a priority in shifting the current mindset,” he says.