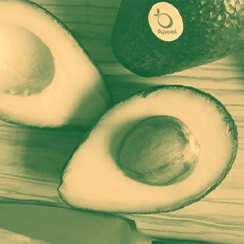 Apeel Sciences’ food-based coating can extend the life of produce so that grocery stores–and consumers–don’t need to throw as much away. It’s one of the winners of Fast Company’s 2019 World Changing Ideas Awards.

Stacked on a shelf at a Kroger grocery store, these avocados look like any other avocados. But each fruit is coated in an invisible, edible, plant-based coating that acts as a hidden weapon against food waste.

Apeel Sciences, a startup founded in 2012 with a grant from the Gates Foundation, is beginning to remake produce sections in a bid to tackle one of the world’s major sustainability challenges: Each year, roughly a third of the food that farms grow is wasted, wasting water, fertilizer, and energy along the way. If food waste was a country, it would be the third largest emitter of greenhouse gas pollution in the world.

For fruits and vegetables, Apeel founder James Rogers realized that a simple coating could extend the life of food. The coating itself is derived from food and slows down both how fast the item loses water and becomes oxidized. It’s able to make fruits and vegetables last as much as four times as long. The product is the winner of Fast Company’s 2019 World Changing Ideas Awards in the Food category.

Avocados, which are particularly likely to end up in the trash because they ripen so quickly, were the company’s first target. So far, Rogers says, the product has reduced retail waste by more than 50%, while groceries are simultaneously selling more avocados and having fewer customer returns. “Reducing waste actually turns out to be good business,” Rogers says. Consumers, of course, also save money if they don’t have to throw out produce at home.

Soon, Apeel-coated limes and asparagus will also be in stores, followed by other produce. While the technology can work on any fruit or vegetable, the company is rolling it out first to categories that could benefit most. “What it’s allowing us to do is reconfigure supply chains,” he says. Right now, supply chains are built around current perishability–everything from when a fruit or vegetable is picked to how it is stored, shipped, and displayed in a grocery store depends on how quickly it rots. By extending the food’s life, each step can change. If asparagus is currently shipped by air from some countries, it could travel by ship instead, saving cost and emissions. Some varieties of fruits and vegetables that are little known because they don’t travel well could begin to be sold beyond farmers’ markets. Farmers can reach more consumers, and consumers can eat fresher food.

“Growers put blood, sweat, and tears into growing the highest-quality produce they possibly can,” Rogers says. “And then the people who consume it are separated by time and distance. We really exist to try to bring that farm quality onto the store shelves in a way that’s going to be the most nutritious, best tasting, least likely [food] to throw away in your home.”