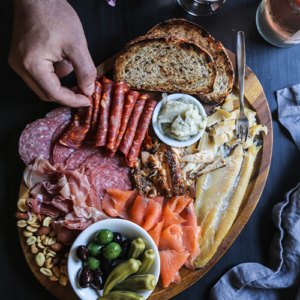 From wine corks to liquor bottles with non-recyclable caps to soapy dishwater that ultimately drips back into the water supply, restaurants generate an amazing amount of waste on a daily basis – and one small Brooklyn wine bar is looking to stem the tide.

According to the Green Restaurant Association, the average dining destination creates 100,000 pounds of garbage per year. Restaurateurs can divert 90% of that from the landfill with the proper recycling and composting program, the organization says, but Rhodora has taken the concept even further, completely eliminating all waste from its operations.

And to be clear, that means everything. No single-use plastics, no products or packaging that can’t be recycled, upcycled, or composted, and no trash in the kitchen, the dining room…or in the bathroom. Wines are natural and low-intervention, from small farms, and the menu – inspired by the conservas tapas bars of the Iberian Peninsula – is short and sweet, just tinned fish and seafood, pickles and charcuterie, cheeses and simple salads, with ice cream for dessert.

Rhodora is the work of the Oberon Group, a local restaurant group with a focus on community and sustainability, and though it’s the first zero-waste bar in Brooklyn, and likely the first in the US as a whole, it’s not the first in the world. The UK’s Silo, which opened in Brighton in 2014 and relocated to London just this fall, served as an inspiration, and the chef there helped the Rhodora team navigate through unfamiliar waters.

As Grub Street reports, they sought out cheeses sans wax rinds, breads that could be delivered by bike, and oysters that would come in a closed-loop delivery system – i.e., in packaging that goes back to the supplier to be reused. There’s a composter for food scraps, and as for that bathroom issue, there’s TerraCycle, a New Jersey recycling company that handles hazardous waste – one of their collection boxes has been installed in the facilities.

The idea here, the team says, is a straightforward one: to set a standard for others to follow. “The food world has traditionally done such a poor job of being environmental stewards,” Oberon deputy director Halley Chambers told Grub Street. “If we can build a model of a sustainable trash-free relationship, suppliers can start replicating it.”