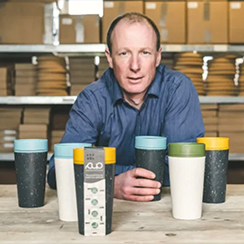 This reusable mug is made from recycled coffee cups

Coffee cups are hard to recycle and a huge waste problem. Now they’re being used to make rCup, a mug that can keep you from wasting coffee cups in the first place.

Most coffee cups–around 99.75%, by one U.K. estimate–end up in the trash. Now one design company is making some of them into new reusable coffee mugs.

“We’ve only got finite amount of resources on the planet, and it’s fairly essential that tomorrow’s product has to be made from today’s waste,” says Dan Dicker, a former product designer at Dyson who now runs Ashortwalk, the British company that created the reusable mug, called rCup. It’s available in the U.K. now, for £12 for a 12-ounce mug, and will likely come to the U.S. later this year.

The designers, who focus on making products from hard-to-recycle materials–like birdhouses made from plastic plant pots–started working on the project after requests from coffee retailers that are under increasing pressure to find solutions for the problem of single-use waste. Around 2.5 billion coffee cups are thrown out in the U.K. alone each year. Typical paper coffee cups have a plastic lining. To recycle them, you first need to separate the materials, which requires specialized equipment. In designing the process to make their new mug, the designers decided to use whole cups instead. After cleaning the cups, they’re shredded into tiny pieces and blended with recycled polypropylene to create a new resin; the long fibers of the paper help strengthen the new material. One standard-sized mug contains six former cups.

Making a new product from the waste creates new incentive for recyclers to process the material. The value per ton of used cups now is around £120 ($150) now, Dicker says. “If you then convert those cups into that resin, the value goes up to £1,200 a ton. If you then take that resin and turn it into a new product, say the rCup, then the value goes up to, believe it or not, literally £30,000 a ton. What you’re doing is increasing the value of the material that then stimulates the economy behind it.” When the company begins to work in the U.S., it wants to use the product to help build up better infrastructure for collecting and recycling cups locally.

He argues that this type of product also motivates consumers to actually recycle. “They start to believe that if they make the extra effort to put their coffee cup in the right bin, then good things will start happening, which is also vital,” he says. “Really, unless you’ve got the public on your side, then you’re never, ever really going to crack the problem.”

The mug itself is designed to solve some of the problems that other reusables have; the designers found in user research that other reusables were often abandoned in cupboards rather than regularly used. It’s leakproof, so it can be dumped in a bag with a laptop. The lid pops open and closes with one hand, and it uses a 360-degree opening rather than a small hole, so the scent and flavor of the coffee is stronger. The cup is also insulated. The lid and lining are both made from polypropylene, like the outer shell, so that everything is easily recyclable.

The growing pile of coffee cup waste would be best served by a full switch to reusable mugs. But while single-use cups still exist, this type of solution–and other products that can be made from the same resin–could help divert those cups from landfills. The mug is designed to last at least 10 years, but when it wears out, it can be recycled via regular curbside recycling. “The big thing is to get the most use you can out of that material,” Dicker says.