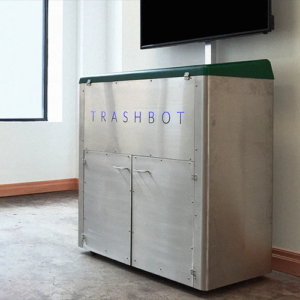 This robot trash bin automatically sorts your recyclables for you

No more standing over the bins, trying to decide whether your empty container is trash or recycling.

At an office in San Francisco, if you drop a coffee cup in a robotic waste bin, the machine will automatically sort the cup for recycling. The office is one of the first to use the technology, called TrashBot, from a startup called CleanRobotics that is trying to solve a fundamental challenge in recycling: Even when someone is diligently trying to reduce waste, there’s a good chance they’re recycling wrong.

“The idea was really born out of frustration,” says Charles Yhap, cofounder and CEO of CleanRobotics, which is a semifinalist in the current IBM Watson AI XPRIZE. He points to the example of a store like Whole Foods, where anyone who eats at the salad bar then has to figure out which bin to use for their fork and box and cup. “I’ll eat my food and I go to throw something away and I’m confronted with an array of waste bins, and it’s just so confusing—everywhere you go, the rules are slightly different, and I’m still not sure that I’m doing it correctly.”

He thought that technology could help. “We started looking at the diminishing costs of sensors and robotic components and the increasing accessibility of algorithms and AI systems and we thought, maybe we can build something that does this better than people,” he says. It helped that current bins are already expensive—a single set in an airport might cost $1,200. “These are just shiny metal tubes that don’t do anything for you. So we thought we could build a robot that is price competitive and adds a ton more value.”

You can use the bin essentially like any trash bin, although you have to throw in one piece of trash at a time for the system to recognize it. When a bottle or container goes in the bin, the lid automatically closes, and a camera and sensors send data about the item to software that classifies it and sorts it into the correct internal bin. After three to five seconds, it’s ready for the next item.

Some organizations have argued that a low-tech solution could work. A nonprofit called Recycle Across America, for example, argues that the biggest problem recycling faces today is contamination when recycling is sorted incorrectly—China stopped accepting most recyclables from other countries because contamination rates were so high—and simply adding clear, consistent labels to bins could fix that. Yhap is more skeptical that this type of labeling scheme can be adopted, and thinks that better labels alone won’t solve the problem.

“You could argue that awareness about the importance of recycling has never been higher than it is today,” he says. “We’re facing a climate crisis and everybody’s thinking about ways to mitigate their carbon footprint, and waste is really a natural one. And yet, people still can’t recycle correctly. I don’t think it’s just a labeling issue. I think it’s just a really complicated problem.” Other new technology can sort recycling once it arrives at recycling plants, but Yhap says that the first step of sorting at bins is also necessary to ensure that recyclable materials aren’t contaminated. Ultimately, better sorting means that materials have more value and are more likely to actually be reused.

As recycling regulations change, the machines can automatically update; they can also adjust to the preferences of recycling centers (the robot can detect, for example, how much food is left in a container). The company’s first bin, designed for high-volume locations like train stations and airports, will soon be followed by smaller versions for small cafes and offices, and versions that also allow for sorting compost. The company is currently raising funds to scale up, and exploring new business models that would allow it to install its bins free in some locations. It wants to make the bins widely available. “We definitely want to have a version of TrashBot for every setting where waste is being generated,” Yhap says.