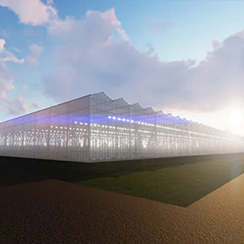 AppHarvest is building a 60-acre greenhouse in Kentucky to provide a new source of sustainable agriculture that doesn’t need to be shipped so far into East Coast cities.

On land that was once part of a cattle ranch outside Morehead, Kentucky–a small town where roughly one in three people live below the poverty line–a massive new 60-acre high-tech greenhouse is designed to bring back local jobs while shrinking the environmental footprint of delivering food to cities like Washington, D.C. and Nashville.

“We’re really setting out to develop the eastern part of our state into a produce hub for the U.S.–taking a portion of our state that prided itself on powering the country in the coal industry and pivoting to being a leader in sustainable agriculture,” says Jonathan Webb, founder and CEO of AppHarvest, the agricultural startup that recently closed an $82 million deal to build the greenhouse.

Webb, a native Kentuckian who graduated from college around the time of the 2008 financial crisis, has spent his life watching the coal industry collapse. But he recognized that the region has more possibilities that just mining. The state’s location is strategic for deliveries: Trucks leaving the area can reach 70% of the American population within a day. (Amazon is building a new hub in Kentucky for the same reason.) With year-round, efficient production, a food company could compete with produce coming from much farther away. “Instead of shipping five days on an 18-wheeler from Mexico or California to the eastern part of the U.S., we can get that down to a one-day drive,” Webb says. He calculates that would mean using 80% less diesel than trucking produce from Mexico.

That’s not to say that this type of growing has no environmental impact. The greenhouse itself is being built in the Netherlands, the world leader in greenhouse technology, before being shipped to the U.S., and has a carbon footprint both in construction and delivery. But AppHarvest has designed the system to have as little impact as possible. The greenhouse will grow tomatoes and cucumbers using hydroponics, a growing system that grows plants in a nutrient solution rather than soil. It uses 90% less water than farming in a field, and will rely entirely on rainwater stored in a retention pond on-site. Because the facility is enclosed, it eliminates the need for pesticides. Unlike fully enclosed indoor farms in warehouses, it will use sunlight along with artificial lighting, so it can save energy. Webb, who previously worked in the solar industry, is also interested in using renewable energy to power the whole system.

The greenhouse can also meet supply better than urban farming, he argues. “I’m a huge fan of hyperlocal, urban farming,” he says. “But the reality is the average American meal travels 1,500 miles by the time it gets to our plate. And we’re not going to go from 1,500 miles to a mile. It’s just unrealistic–you will not feed America that way.” To begin to replace produce imports from Mexico–4 billion pounds in 2018–he thinks production has to happen at a larger scale.

Climate change could make it more difficult to grow in current agricultural hubs like California, where drought is likely to become more common, but Webb envisions that greenhouses could spread regionally throughout the country. Consumers will get fresher produce, and grocery stores will have the advantage of produce that lasts longer on the shelf. AppHarvest says that because of the savings in fuel from transportation, it can sell tomatoes at a competitive cost. “We plan to compete with conventional pricing,” Webb says. “We do not want Americans to pay more for fresh fruits and vegetables.”

While some indoor farms incorporate as much automation as possible, AppHarvest plans to rely on humans. The facility will provide 100 construction jobs and 285 full-time, permanent jobs that pay a minimum of $13 an hour plus benefits. “We feel like this is the next generation of farming,” he says. “We want our farmers to have the tools and be at the forefront, so we will layer in technology over time to continue to drive efficiency inside of our facility. But for us, we feel that having a human touch in the middle of food production is something that’s still important.”