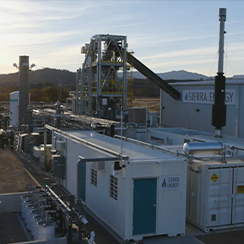 Sierra Energy’s new blast furnace, which heats trash to 4,000 degrees and then harvests the gas to make plastics and fuel, was just funded by the Bill Gates-led Breakthrough Energy Ventures.

When trash ends up in landfills, it’s not just taking up space, but as it breaks down, it also becomes a major source of methane, a greenhouse gas as much as 86 times as potent as CO2. As garbage grows around the world—like a mountain of trash outside New Delhi known locally as Mount Everest, which stands higher than 200 feet tall—so does the problem.

One startup wants to eliminate the pollution by essentially vaporizing garbage to turn it into clean energy and fuel. The company, called Sierra Energy, just raised a $33 million Series A investment round led by Breakthrough Energy Ventures, the Bill Gates-led fund that also includes investors like Marc Benioff, Richard Branson, and Jeff Bezos.

The company isn’t aiming to replace recycling or composting, but to handle the millions of tons of waste that currently goes to landfills. “We take what’s leftover,” says CEO Mike Hart. The technology can process nearly anything, including medical waste and hazardous waste. “It allows you to recycle the entire waste stream,” he says. “The way we do that is by bringing the temperature of waste up to 4,000 degrees Fahrenheit, twice the temperature at the core of a volcano. At that temperature, everything breaks down molecularly.”

The technology, called FastOx, uses a modified blast furnace, the same basic equipment typically used to make steel. By injecting pure oxygen into the furnace, the new process starts a chemical reaction with carbon in the waste, heating up the furnace. “This doesn’t require external energy,” Hart says. “It’s just a chemical reaction of carbon and oxygen.” The process also adds steam to regulate the temperature, which sustains itself as the system keeps feeding in more trash. Any metal inside the garbage melts and can later be reused.

While other trash would create methane as it rots in a landfill, the extreme heat of the process and the steam create only carbon monoxide and hydrogen. Unlike an incinerator, it doesn’t produce emissions as it works; all of the gas is captured for reuse. The gas can be used to create a variety of products, from jet fuel to plastic or fertilizer, instead of making those products from fossil fuels. If the gas is used to make fuel, that fuel will still produce emissions, but fewer than the fossil alternative. (The company’s diesel, Hart says, is 20 times cleaner than the California fuel standard.) The company’s hydrogen can also power vehicles without emissions. The gas can also be used to produce electricity through fuel cells, gas turbines, or other equipment.

After a decade of smaller pilots, the company has a new plant located on an Army base in California where it takes in garbage, shreds it into smaller pieces, and feeds it into the furnace. At the demonstration plant, it’s also showing how the process can create both fuel and electricity (future plants will do one or the other). Since landfills charge “tipping fees” to take trash, the new system could actually save money; a waste hauler that currently pays a landfill, for example, could decide to build its own system using the technology and then could both avoid paying fees and make money by selling electricity or products like fuel. Cities could also decide to build plants of their own. “What we found is that people can make a profit at less than the current tipping fees in most countries in the world,” Hart says.