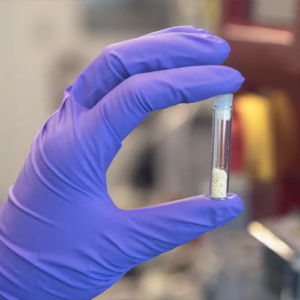 When it ends up in a landfill, food waste is a potent source of greenhouse gas emissions. A Toronto-based startup called Genecis, part of Y Combinator’s latest cohort, turns it into something valuable instead: compostable plastic that can replace plastic made from petroleum.

“We wanted to convert food waste and make it into a really useful material,” says Genecis CEO Luna Yu. “Food waste is pretty much a concentration of carbons, very similar to crude oil from the ground, that you can make a lot of products out of. We thought with today’s technology, we can convert the carbon from food waste as a really low-cost feedstock into high-value chemicals and materials.”

The company uses bacteria to break down food waste into short-chain carbons, and then it uses another type of bacteria that can eat those carbons and convert them into a type of polymer called PHA, or polyhydroxyalkanoate. “PHAs are essentially the fat of bacteria—a naturally occurring polymer that’s made by bacteria as an energy storage unit,” she says. “That’s why it’s fully compostable. When you throw it into nature or marine environments, bacteria will just eat it up really quickly.” Other types of compostable plastic can’t break down as easily; a corn-based plastic fork acts like regular plastic if it ends up in the ocean.

There’s no shortage of food waste as a raw material, even as companies throughout the food chain and some consumers attempt to reduce waste. The new technology can make use of post-consumer food scraps, unlike other solutions such as donating surplus food or, say, turning leftover bread into beer. The startup is partnering with the food service company Sodexo, which sees it as a potential circular solution—food waste from corporate cafeterias could be turned into compostable foodware for those same cafeterias. The companies are collaborating on a pilot now that takes food waste from one of Sodexo’s client sites, producing roughly enough plastic for 10,000 bioplastic spoons so far.

The startup has a 4,000-square-foot pilot facility now and a grant from the Canadian government to build a larger demonstration plant next year. Ultimately, it plans to partner with waste companies that have anaerobic digesters, equipment that typically turns food waste into biogas and fertilizer. “They already have very similar equipment and have very similar first-stage fermentation as us, so we don’t have to go through the permitting process or the establishing of a completely new plant from scratch,” Yu says. “What we plan to do is become an add-on unit to existing anaerobic digesters.” That will save capital costs and also make it possible for existing waste companies to make more money from processing food waste.

When it comes to market, the new plastic will be more expensive than conventional plastic, and likely used for the packaging of premium foods, or for the medical industry or as 3D printing material. But the cost could eventually drop. “With further genetic engineering, as well as further improving of our bacterial cultures, we could potentially bring the cost down to be directly competitive to commodity plastics in the future,” she says.