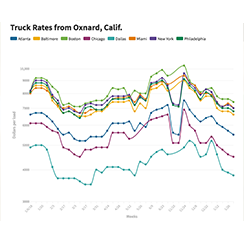 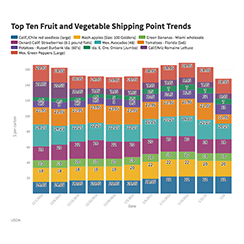 Truck rates have sagged a bit as truckload capacity continues to build in the first weeks of 2019, according to a report from DAT Solutions.

The firm said in a Jan. 19 report that national average spot rates for dry van, reefers, and flatbeds continue to decline.

In a typical seasonal slump, the number of trucks on the spot truckload freight market increased 7.4% while the number of loads dipped 10% during the week ending Jan. 19, said DAT Solutions, which operates the DAT network of load boards.

Average spot rates were down on several key regional reefer lanes and major markets across the country.

Check out the truck rates from Oxnard California over the past year in the chart, and it is plain to see rates have fallen well below a year ago.

Also, check out the price trends of the top ten produce items by volume.