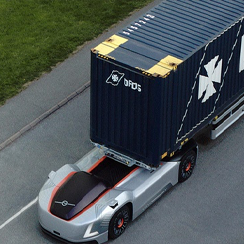 This might be the first example of a truly driverless cargo truck taking to public roads. Autonomous trucks have already begun hauling cargo in pilots across the country, but these usually have a driver behind the wheel, just in case.

However, Volvo does put some caveats on Vera’s capabilities. The tractor unit is designed for “repetitive” jobs and is best “suited for short distances” with a top speed of 40 km/h (about 25 mph). The announcement did not say how long it would travel on public roads between the facilities. When Volvo announced Vera in 2018 it said it was best suited for jobs like transportation between logistics hubs, “but additional use cases can also be applicable.”

Vera’s operations are handled through a central control center the vehicle connects to using a cloud interface. The plan for this pilot is to have “several Vera” units operating between the logistics center and the port. The control center is able to monitor the fleet of vehicles with information on their location, battery charge, load content, any service needs and other information, according to Volvo.

“Now we have the opportunity to implement Vera in an ideal setting and further develop her potential for other similar operations,” Mikael Karlsson, the vice president autonomous solutions at Volvo Trucks, said in a statement.

APM Terminals is looking into similar automation solutions at the Port of Los Angeles, but has come up against a strong union that doesn’t want to see longshoremen lose their jobs in the face of increasing automation. The city’s mayor stepped in earlier this year to delay a decision on the project for 30 days, but negotiations have continued past this mark.

Autonomous trucks are increasingly seen in tests and pilots across the country and around the world, but the reality of ubiquitous autonomy is likely years down the road. However, trucks on the roadways are already becoming increasingly automated. The trucking industry is in favor of technology like automated emergency braking and vehicle-to-vehicle communication, according to recent Congressional testimony by American Trucking Associations CEO Chris Spear.