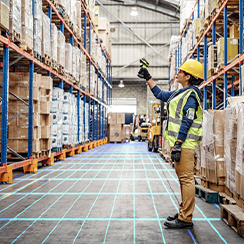 The study reports on the forward-thinking fulfillment strategies companies are focusing on to keep up with the growth of the on-demand economy. Both automation and worker augmentation solutions will be a key focus for decision makers’ plans during the next five years. More than three-quarters (77 percent) of respondents agree that augmenting workers with technology is the best way to introduce automation in the warehouse, but only 35 percent have a clear understanding of where to start automating. Eighty-seven percent of decision makers are currently in the process of or planning to expand the size of their warehouses by 2024, with 82 percent anticipating an increase in the number of warehouses during this timeframe.

By 2024, automation will enhance worker performance rather than replace workers.

Rethinking fulfillment strategies and operations to meet emerging challenges across the warehouse remains a top priority.

•  Fifty-nine percent of respondents cited capacity utilization as a significant expected challenge and plan to address it by expanding the size of their warehouses.
•  Sixty percent of organizations cited labor recruitment and/or labor efficiency and productivity among their top challenges, with 63 percent of respondents noting an immediate focus on individual or team productivity outcomes.
•  IT/technology utilization was identified both as the most anticipated operational challenge (61 percent) of the next five years and a desired long-term outcome for increased asset visibility, real-time guidance and data-driven performance.
•  As warehouses expand, so will the volume of stock keeping units (SKUs) and the speed items need to be shipped. Decision makers will seek increased visibility and productivity by implementing more robust returns management operations (81 percent), task interleaving (80 percent), value-added services (80 percent) and third-party logistics (83 percent).

The investment and implementation of new technologies is critical for remaining competitive in the on-demand economy.

•  Almost half (46 percent) of surveyed respondents cited faster delivery to end-customers as the primary factor driving their warehouse growth plans.
•  More than three-quarters (77 percent) of decision makers agree that they need to modernize operations across the warehouse to remain competitive in the on-demand economy but are slow to implement new mobile devices and technology.
•  Seventy-three percent of companies are currently modernizing their warehouses by implementing or refreshing mobile computers, tablets and barcode scanners.

By 2024, modernization will be driven by Android-based mobile computing solutions (83 percent), real-time location systems (RTLS) (55 percent) and full-featured warehouse management systems (WMS) (54 percent).
Sixty percent of respondents cited mobile barcode label or thermal printers as a key area of investment as part of their plans to add, expand or upgrade devices in the next three years.

KEY REGIONAL SURVEY FINDINGS
Asia-Pacific
By 2024, 87 percent of respondents plan to implement a mobile execution system to better manage workers on the warehouse floor.
Seventy-three percent of decision makers plan to invest in smart watches, smart glasses and hip-mounted wearables in the next three years.

Europe
The square footage of the average warehouse is projected to increase by 26 percent—more than in any other region—in the next five years.
By 2024, RFID and locationing technology usage is anticipated to increase for outbound operations with more than one in five planning to use them for packing (25 percent), inventory management (20 percent) and picking (19 percent).

Latin America
Latin American decision makers identified labor efficiency or productivity (71 percent) as the top operational challenge of the next five years.
Ninety-five percent of organizations plan to implement Android-based mobile computers in the warehouse by 2024 to help improve worker productivity and efficiency.

North America
Almost half (49 percent) of North American decision makers identified outbound packing, staging and loading as a challenge.
Ninety-four percent of respondents will have implemented or plan to implement trailer load optimization and/or load compliance solutions by 2024.

The 2024 Warehousing Vision Study included 1,403 IT and operational decision makers in the manufacturing, transportation & logistics, retail, post and parcel delivery and wholesale distribution markets in North America, Latin America, Asia-Pacific and Europe who were interviewed by Qualtrics.